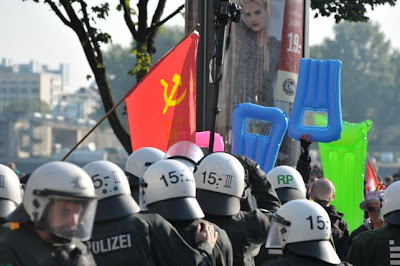 Det som utspelades på Kölns gator förra
helgen var knappast någon seger för demo-
kratin (och definitivt inte för yttrandefriheten....)
Den objektivistiske vikingen i USA har
en personlig kommentar:
***
"On a related note, I was reading a few more
blogs (Fjordman, La Yihad en Eurabia, Gates
of Vienna, among others) about how the
international "anti-fascist" group Antifa was
outright assaulting elderly Jews - calling
them "Nazi scum" and all other sorts of
epithets - all while police stood by.
This took place in Germany, if you can
believe that.
**
German "anti-fascists" viciously beating
Jews who happened to be protesting
the creeping plague of Islamism into Europe.
If it weren't so, the Islamic supremacists
wouldn't be referring to the Iberian
peninsula as "al-Andalus", which is the
name given to the realm of the Almoravid
dynasty, wherein Jews and Christians lived
as dhimmis, and revolts were violently
crushed.
**
Ordinarily, I am not too keen on European
ethnic nationalism as it often appears con-
currently with the neo-fascist movement
that seeks to replace one form of socialist
authoritarianism (Islam) with another
(neo-fascism), but it is times like these
where I will openly ally myself with the
basic aims of the European New Right
- Europe must remain European. It must
not become another launching station
for the global Caliphate that so many
would like to see the fruition of.
**
The ideological and media war against
Islamic supremacism has made for
some odd bedfellows, but until more
Europeans start to realize that their
heritage and very way of life is under
real attack by foreign invaders, the ethnic
nationalists are the best we have.
It might take another bombing, like the
ones in London and Madrid, to get more
Europeans on the same page.
**
I am thankful that there are people like
Geert Wilders, Ayaan Hirsi Ali, and the
late Pim Fortuyn to resist Islamism
while rejecting neo-fascism."
Upplagd av hcp kl. 13:00