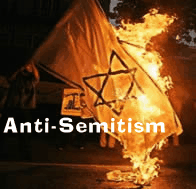 Human Rights First:
Antisemitic violence continued to rise across
many parts of Europe and North America in
2007, despite improvements in some countries
where there nevertheless remain historically
high levels of violence motivated by anti-Jewish
prejudice. But even in these places, there is
pressure on people to conceal their Jewish
identity. The decline in levels of antisemitic
incidents in some countries coincided with
an alarming trend toward an increasing
number of violent personal assaults.
**
In 2007, overall levels of violent antisemitic
attacks against persons increased in Canada,
Germany, the Russian Federation, Ukraine
and the United Kingdom according to official
statistics and reports of nongovernmental
monitors. In the United Kingdom, violent
antisemitic attacks rose while the overall
incident level declined moderately.
The proportion of antisemitic incidents
involving violent attacks on persons held
steady in France, even as overall levels
of antisemitic incidents there dropped
significantly. In Belgium, the Netherlands
and the United States, antisemitic crimes
of violence declined.
There are undoubtedly a number of other
European countries where antisemitic
violence is also problematic, but where
information on attacks—either from official
or unofficial sources—is much less readily
available.
**
Between 2000 and 2005, levels of antisemitic
violence had fluctuated significantly in direct
relation to events in the Middle East, which
provide new impetus for those already pre-
disposed to antisemitism in Europe. Since
2005, this pattern has to some extent changed,
with month-by-month levels of antisemitic
violence showing little change. These more
uniform rates show little correlation with
specific events involving Israel and the
Middle East. This does not mean however,
that the threat of antisemitic violence has
diminished. In fact, the new norm is for
very high levels of antisemitic violence,
still estimated in a number of countries
to be several times higher than that of
the 1990’s.
**
In some countries, the frequency and
severity of attacks on Jewish places of
worship, community centers, schools,
and other institutions has resulted in
a need for security measures by re-
presentatives of both the Jewish
community and local or national
government. Enhanced security can
be credited for a reduction in attacks
on Jewish sites and property in France,
Germany, and the United Kingdom,
where successive governments have
made a strong commitment to protect
the Jewish community.
However, the need for such security is
a powerful indicator of the revival of
antisemitism in recent years.
**
Monitoring, a vigorous law enforcement
response to individual incidents, cooperation
between the police and affected communities,
and attention to prevention, including through
education, are all needed to combat anti-
semitism and its violent manifestations.
Although some governments in Europe and
North America have instituted effective
systems of monitoring and reporting on
antisemitic hate crimes, most have not.
And, while local nongovernmental organizations
and community leaders provide information
on such crimes, as well as insights into the
response of the communities affected to
those crimes, these initiatives are no
substitute for state authorities
addressing the problem directly.
**
Link to the Report
Upplagd av hcp kl. 12:00