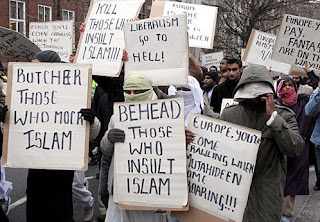 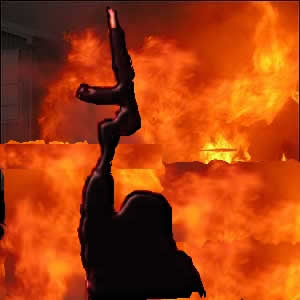 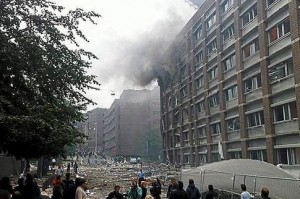 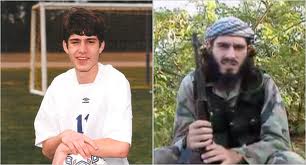 Veckotidningen Blitz i Bangladesh publicerar
en annons knappast någon tidning i
Europa längre skulle våga använda:
We are the only anti-Jihadist newspaper in
the Muslim world, confronting religious
extremism and Jihad thus promoting inter-
faith harmony. Award winning journalist
Salah Uddin Shoaib Choudhury is the
editor of this newspaper.
Many a times, Weekly Blitz came under
attack of religious fanatics and political
hoodlums in Bangladesh.
Tänk er den i Dagens Nyheter....
**
Nyligen varnade Blitz för islamiseringen
av bl a polisen och det politiska livet i
Storbritannien. Det var kanske inte så många
nya överraskningar. Det mesta har ni redan
kunnat läsa i t ex Jihad, PI och Mitt Sverige.
Islamisternas maktövertagande i Tower
Hamlets, kampanjer mot sekulära muslimer
och homosexuella, införandet av s k muslimskt
beteende med slöjtvång i vissa stadsdelar, de
hundratals shariadomstolarna, galopperande
antisemitism som snart liknar Malmö och
polisens försök att mörka islamistiskt våld....
Men visst är det en klar varningssignal
när sekulära muslimer varnar de brittiska
myndigheterna för att dras ännu längre ned
i det islamistiska träsket.
**
"In various ways, Islamist norms, perspectives,
and propaganda have already been soaked up
by Britain's "elites," and into British society.
The defense, and even the promotion, of sharia,
by such eminent figures as the Archbishop of
Canterbury and Stephen Hockman QC or support
for Hamas and Hezbollah by Leftists on "pro-
Palestinian" demonstrations, are merely the
most obvious manifestations.
**
No less troubling, however, is the recent anti-Israel
turn by the Conservative Party – with David Cameron,
for example, calling Gaza a "prison camp." The Prime
Minister seems genuinely unaware that the destruction
of Israel is a central plank of Islamism, motivated
by both a hatred of Jews and Western-style liberal
democracy, and a desire to reclaim land once
conquered, and made part of the dar al-Islam.
**
It would appear that Britain's press does not feel
such outrage at the police covering up violent crime
by Muslim gangs and Muslim fundamentalists, as
it did to the negligent, perhaps criminal, response
to the racist murder of Stephen Lawrence. However,
it should not be beyond the government to grasp
the essential nature of Islamism, and to make sure
that statements by officials challenge, rather than
lend credence to, its propaganda."
Upplagd av hcp kl. 09:00