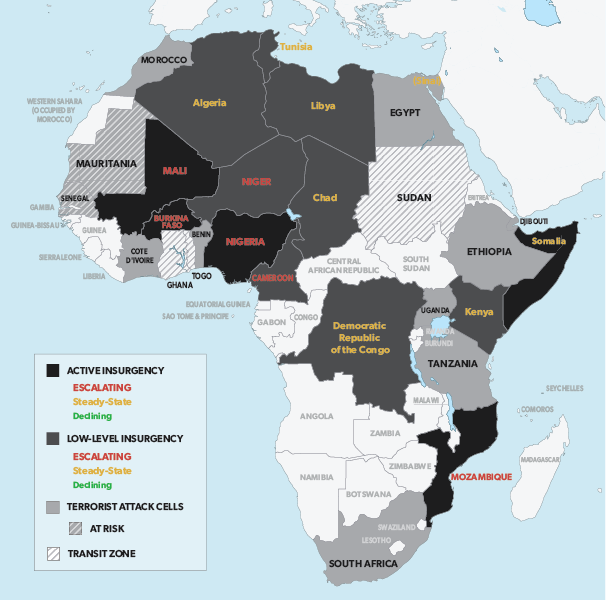 Jihadist threat is expected to multiply in sub-Saharan Africa, as security and intelligence actors in the region forecast growth of Islamic State (ISIS) and Al-Qaeda’s associated groups in 2021.

Jihadist landscape in sub-Saharan Africa is fast change and become a preferred forefront both for the terrorists and counterterrorism actors.

Notably, increased jihadist operations perpetrated by ISIS and Al-Qaeda affiliates in the region continue to be reported. With escalating jihadist operations in the region, subsequently, sustained Western counterterrorism efforts and attention has shifted from former jihadist bases in the Middle East and south Asia, respectively, to the Sahel and Nigeria, the Horn of Africa, and, most recently, the continent’s southeastern Swahili coast.

Sub-Saharan region has become a preferred destination for jihadists, positioning their groupings throughout the region in an effort to get influence, getting new recruits, establishing and capturing new territories and spreading of jihadist ideologies besides success claims through propaganda channels. (basically, online pro-jihadist media).

Jihadist groups are keen on establishing foothold on regions notably with weak states with some welding international crisis. The terror outfits thus are able to exploit these crises (especially political crisis and internal wars), by mounting complex and coordinated operations against individual county’s security forces.

ISIS and Al-Qaeda associates have taken advantage of the porous borders throughout Africa and, in opportunistic method, have banked on troubled/weak political transitions and lack of security actors’ accountability. Jihadist fast have established foothold in already weak and fragile countries such as Mali and Mozambique.

In the Sahel, the Islamic State in the Greater Sahara’s guerrilla campaign has demonstrated morphed capability in staging in ambushes, mortar fire, and the use of improvised explosive devices (IEDs). Despite rivalry between different jihadist groupings, their individual leaders have been able to take charge of their affiliate to remain intact and relevant. Pro-ISIS and Al-Qaeda affiliates have also proven adept at recruiting new members by greatly exploiting local ethnic grievances besides use of intimidation and threats to the locals towards joining their cause.

The Islamic State West Africa Province, or ISWAP, which formally is integrated with ISGS in ISIS’s organizational structure, has remained active throughout the Lake Chad Basin, its foothold is now in northeastern Nigeria and escalating its activities in southeastern Niger.

To appeal to potential recruits to join, ISWAP continue to promote heavily its operations by frequently propaganda of perceived success attacks against Nigerian security forces mirroring those of ISIS against the Syrian army, in the Middle East. Within Nigeria, ISWAP’s strength has obscured that of Boko Haram, which continues to lose support from its combatants besides its local supporters.

However, Boko Haram lethality cannot easily be wished away. The jihadist group is connected with equally ruthless bandits in northwestern Nigeria in an attempt to outmaneuver ISWAP and set up its own affiliates in that region.

Al-Qaeda affiliate Jama’a Nusrat ul-Islam wal Muslimin, or JNIM on the other had also consolidating its hold on rural areas of northern Mali and fast is expanding throughout the Sahelian border regions. JNIM continue to demonstrate its ability to mount increasingly sophisticated asymmetric operations, despite immense pressure on the group from French military forces and rival militias.  The group has been able to weather from the successive loss of its key Algerian and Tunisian leaders from its ‘parent’ group, Al-Qaeda in the Islamic Maghreb, or AQIM.

A number of regional jihadists, including those linked to Al-Qaeda survives through extortion, taxing locals and smuggling of booming illicit gold trade to finance their operations.

Same way, jihadist operations in the Horn of Africa and the Swahili coast have escalated over the recent years. In Somalia, the home-base of the Al-Qaeda associated Al-Shabaab has conducted dozens of operations against security and civilian targets in the rural areas and in the capital Mogadishu.

With impunity, Al-Shabaab continue to stage ambushes and notably, the use of IEDs, mortar and landmines by the group has proficiently morphed. Al-Shabaab fighting units are heavily armed and continue to conduct coordinated, multiple attacks, in Somalia and beyond, particularly in Kenya where the group has enjoyed recruitment success over the years since Kenya Defense Forces (KDF) crossed over to Somalia in 2011.

Al-Shabaab also has banked on propaganda media channels to promote it campaigns besides to appeal to potential recruits in East Africa. The recent arrest in the Philippines of an Al-Shabaab-trained Kenyan who plotted airplane attacks on the United States is a reminder that Al-Shabaab is still the most sophisticated jihadist group on the continent, with ISWAP and JNIM a close second and third.

In East Africa, jihadists are also finding favorably destination in Mozambique and in Democratic Republic of Congo. The Islamic State Central Africa Province, or ISCAP is currently the one maintaining its branches in the above-named countries. Jihadists from Tanzania are also joining Islamic State affiliate operating in Mozambique. ISCAP received ample media guidance, funding and reinforcements from tactical strategists in ISIS core, facilitated through a network of logisticians operating in the region. The Islami State associate has escalated attacks from across the localities of Mozambique; Cabo Delgado, Mocimboa de Praia, Quissanga among others.

There is also significant potential for spillover violence in all of the aforementioned regions of Africa in 2021as evidenced by the Sahel. Jihadist conflict in Mali expected to further spread to Cote d’Ivoire, Benin, and Burkina Faso, and countries like Ghana and Senegal may be next.