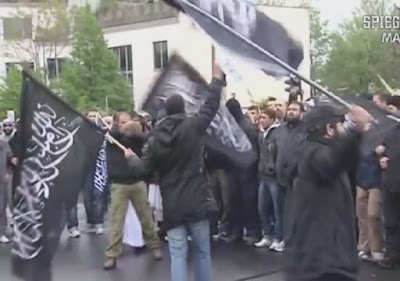 With uncontrolled mass-migration from Arab and Muslim majority countries, Germany is opening up itself to the global Jihadi resurgence represented by groups ranging from ISIS to Muslim Brotherhood. German Chancellor Angela Merkel, in midst of her re-election bid, has refused to show any flexibility on her “Refugee Policy”. Merkel reiterated again this week that there will be no upper-limit to migrant intake if she wins the parliamentary election this September.
German newspaper Die Welt reported the latest revelations made by Saxony’s Intelligence Agency (LfV):


Saxony state’s Intelligence Agency is watching the growing influence of radical-Islamic Muslim Brotherhood organisation with great concern.
Capitalising on the lack of prayer rooms for newly-arrived Muslims as part of the refugee influx, Muslim Brotherhood is using organisations like “Saxony’s Community Centres” (SBS) to build networks and spread its vision of political Islam, LfV’s President Gordian Meyer-Plath said in Dresden. (…)
Currently, buildings are being bought at massive scale to set up mosques or community centres for Muslims. These activities are taking place in several cities including Leipzig, Riesa, Meissen, Pirna, Dresden, Bautzen and Görlitz.
There is no shortage of financial resources, noted Meyer-Plath. “They are going across the state with huge sums of money and buying up real estate.” [Author’s translation]

The question is, would German authorities act on this intelligence and crackdown on Muslim Brotherhood’s growing network in the country?  So far, Merkel’s Government has been deaf to other equally alarming intelligence findings. According to the last year’s annual report of Germany’s intelligence agency, Germany is home to 1000 Hezbollah and 300 Hamas members, both internationally recognised terrorist groups. German authorities have failed to clamp down on these terrorists groups operating on its soil in any meaningful way.
If Muslim Brotherhood’s aim is to impose Sharia in Germany; then it is already succeeding brilliantly.

Germany’s Minister of Justice recently drafted a law that refuses to ban child marriage. Government statistics put the number of married children (mostly minor girls) in Germany at 1,475, of whom 361 are under the age of 14 — a rising trend thanks to mass-migration from Muslim countries.
As the German newspaper Bild described the law: “A 13-year-old child bride would have to testify against her husband, saying that her well-being as a child is under threat. If neither the child nor the Child Welfare Service lodges a complaint, for all practical purposes the marriage would be declared legitimate.” [Author’s translation]

According to a government study released this week, the practice of female genital mutilation has reached historic highs in Germany. The Federal Ministry of Family counted 47,000 cases of female genital mutilation in the country, many carried out on girls taken out of Germany under the pretext of vacation. The practice is prevalent in Arab-North Africa.
At the altar of Multiculturalism, Germany’s ruling class has no problem swapping the Rule of Law for stone-age Sharia practices. Their virtue signalling to each other is more important than the rights and wellbeing of women or Children.