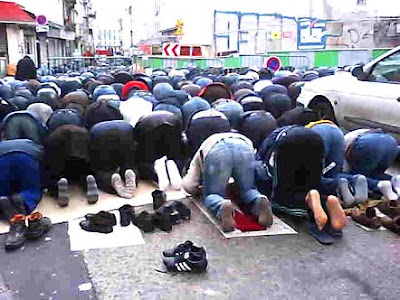 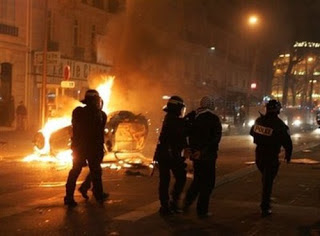 
1. The Palestinian Return Centre (PRC) is a Palestinian center for anti-Israeli propaganda, established in London in 1996. It is affiliated with Hamas and the Muslim Brotherhood and some of its senior figures are Hamas activists who found refuge in Britain.
2. Its foundation was based on rejection of the Oslo Accords, a strong denial of the right of the State of Israel to exist and the concept of the "right" of the Palestinian refugees and their descendents to return to the places abandoned in 1948, all to be used as tools to fight Israel and the peace process. The PRC holds intensive anti-Israeli propaganda activities in Britain, Europe and other countries around the globe and is an important factor in  the network of organizations participating in the international campaign to delegitimize Israel.
3. The unequivocal connections between the PRC and Hamas, as described below, caused it to be outlawed in Israel. On December 27, 2010, the Israel Security Agency said in a statement that on December 5 Israeli Defense Minister Ehud Barak had signed an order outlawing the PRC as an "unlawful association because it is part of the Hamas movement." The statement also noted that the PRC was a coordinating organizational arm of the Hamas movement in Europe, and that its activists, who were senior Hamas figures, were working to promote the movement's objectives in Europe and were in direct contact with Hamas senior figures, including movement heads in Damascus.1
4. The PRC's activity centers around disseminating and inculcating the message that all the Palestinian refugees have the "right to return" to Israel (estimated by the PRC at five million).2 Their return to Israel is represented as a "sacred" personal and collective "right," anchored in international law, which no one can bargain with or cede.
5. The demand for the return to Israel of millions of refugees is regarded by the PRC not only as a method which has been proved to sabotage every peace process, but as an important component in a long-range strategy which will eventually lead to a change in the demographic nature of the State of Israel as a Jewish state3 and serve the overall goal of establishing an Islamic  Palestinian state on all of "Palestine," (i.e., the territory of the State of Israel.) Focusing on the "right of return" is the common denominator of all the organizations and individuals around the globe rejecting the Zionist-Israeli model, and has become the motto of the anti-Israeli campaign. Those who employ it ignore the fact that after the State of Israel was founded Jews were either expelled of fled from the Arab countries.
6. The PRC was founded in 1996 in rejection of the Oslo Accords and everything they symbolized. The founder and head ideologue was apparently Salman Abu Sitta, born into a family from Beersheba which fled to the Gaza Strip. He was an independent member of the Palestinian National Council between 1974 and 1993, studied in Egypt and from there went to London, where he received a doctorate in civil engineering from London University. In 1993 he resigned from the Palestinian National Council because he rejected the Oslo Accords, and in 1996 founded the PRC. Today he lives in the United States. He does not belong to the PRC but is active in spreading anti-Israeli propaganda and defaming Israel by comparing it to Nazism.
7. During the fourteen years of its existence the PRC has become ideologically close to Hamas and the Muslim Brotherhood in Britain (the center of the Muslim Brotherhood's political, media and economic activities in Europe). The PRC has not openly stated its strong connections to Muslim Brotherhood-style extremist Islam, but our information and large amounts of circumstantial evidence presented in this study support the existence of that connection. 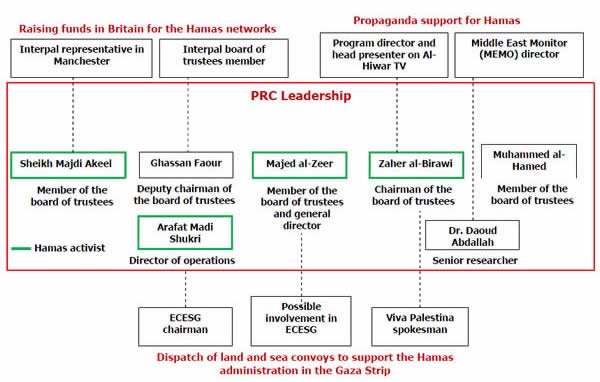 ﻿
8. For example, the PRC's radical Islamic ideology and political agenda are identical with those of the Muslim Brotherhood; members of the PRC's board of trustees and senior functionaries had or have roles in various Muslim Brotherhood-affiliated institutions in Britain; the PRC participates in anti-Israeli activities also attended by prominent activists from the Muslim Brotherhood and other groups and organizations; Zaher al-Birawi, senior PRC figure, is program director and chief presenter of London's Muslim Brotherhood-affiliated Al-Hiwar TV channel; an Egyptian jurist named Subhi Salah, a Muslim Brotherhood member of the Egyptian parliament till 2010, was at the same time unofficially a PRC member (according to his website).
9. Three members of the PRC's board of trustees are Hamas activists who found refuge in Britain in the 1990s. They do not admit to their links with Hamas, in our assessment to avoid complications with British law. Prominent among them are three Hamas activists: Zaher al-Birawi, chairman of the PRC's board of trustees; Majed al-Zeer, PRC general director; and Sheikh Majdi Akeel, a member of the PRC's board of trustees.4
10. The above three Hamas activists are involved in extensive anti-Israeli activities aimed at providing Hamas with ideological, political and practical support. For example, Zaher al-Birawi was active in dispatching convoys to the Gaza Strip through George Galloway's organization, Viva Palestina, with the political goal of strengthening the de facto Hamas administration. Majed al-Zeer participated in anti-Israeli events in European cities and in Damascus in support of Hamas, its political agenda and its strategy of terrorism. Sheikh Majdi Akeel is an activist of Interpal, which sends money to Hamas, and accompanied one of the Viva Palestina aid convoys to Hamas in the Gaza Strip5 (See Appendix II for information about PRC activists). In addition to those three, according to our information Arafat Madi Shukri, PRC operational director, is also a Hamas activist who lives in Britain and is the chairman of the ECESG (a European umbrella organization which sends flotillas to the Gaza Strip). 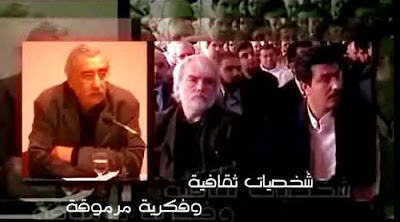 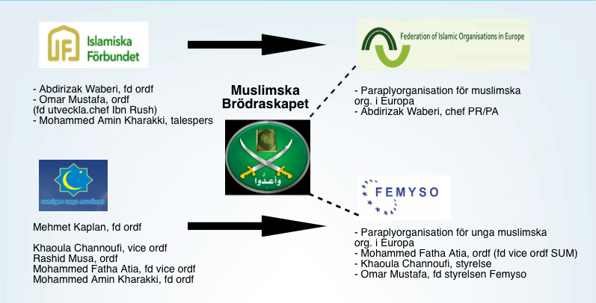 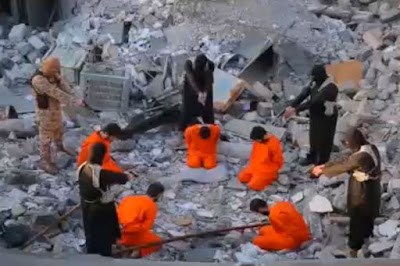