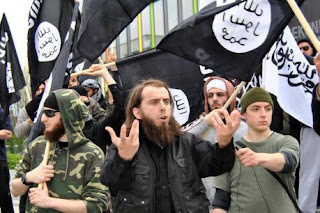 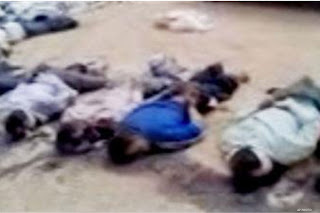 
“It would be a deep wound to lose Christianity’s
own homeland and land of origin,”
Schoenborn said.
“Religion is an essential part of society,” he
observed, as the Islamist resurgence proves.
But policy makers ignore religion’s importance.
**
Disputing Israel’s existence is “out of the
question,” Schoenborn declared.
“I clearly stand for the right of existence of the
Jewish people in their own homeland.”
He regretted both Iraq wars’ impact on Iraq’s once-
relatively-large Christian population, much of which
has since emigrated.
**
Survival for Mideast Christians, Schoenborn insisted,
requires secular states to guard religious freedom.
“No state can assume the Kingdom of God, which is not
identical with any political reality,” he warned.
America’s desire to export democracy has “good intention”
but must help Christians “breathe,” since they are
“landmarks” for pluralism.
Egypt and Syria must not follow Iraq’s example,
he implored.
Upplagd av hcp kl. 11:00 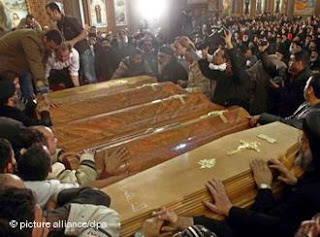 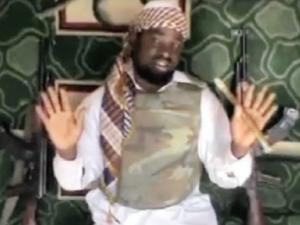 Afrikas tre största islamistiska terror-
grupper: Boko Haram, Al Shabaab och
Al Qaeda i Islamiska Maghreb utökar sitt
ekonomiska, logistiska och operativa sam-
arbete berättar befälhavaren för USA:s
afrikanska kommando:
Washington - Three of Africa's largest extremist
groups are sharing funds and swapping explosives
in what could signal a dangerous escalation of
security threats on the continent, the commander
of the US military's Africa Command said on
Monday.
**
General Carter Ham said there are indications
that Boko Haram, al Shabaab and Al Qaeda in
the Islamic Maghreb - groups that he labelled as
the continent's most violent - are sharing money
and explosive materials while training fighters
together.
**
“Each of those three organisations is by itself a
dangerous and worrisome threat,” Ham said at
an African Centre for Strategic Studies seminar
for senior military and civilian officials from
Africa, the United States and Europe.
**
“What really concerns me is the indications that
the three organisations are seeking to coordinate
and synchronise their efforts,” Ham said.
“That is a real problem for us and for African
security in general.”
***
Läs hela artikeln i IOLNews 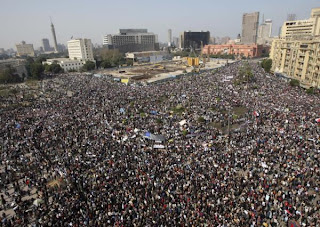 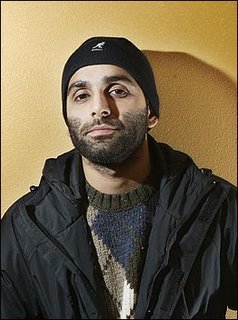 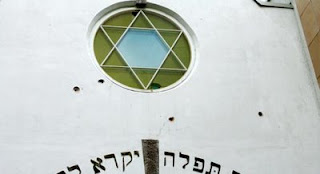 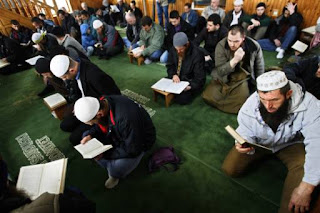 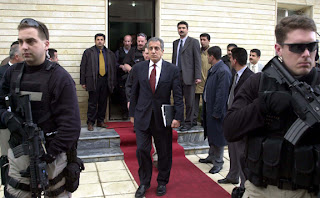 Jonathan Evans, chef för MI5, den
brittiska säkerhetstjänsten, har gjort
ett av sina sällsynta framträdanden.
I ett tal inför Olympiaden i London
varnade han för att hundratals brittiska
medborgare fått terroristutbildning i
Mellanöstern. Länder som Somalia,
Jemen, Libyen, Nigeria och Egypten
producerar idag militanta islamister
redo att begå terrordåd i Europa.
Risken för ett stort terrordåd mot
Olympiaden måste bedömas som
betydande...
**
Britons are increasingly heading to the Middle
East for terrorist training in preparation for
attacks in the wake of the Arab Spring, the
head of MI5 has said.
Jonathan Evans, the director-general of the
Security Service, warned that parts of the
Arab world were becoming a more per-
missive environment for al Qaida and Britons
were travelling there to "seek training and
opportunities for militant activity".
Some will return to the UK and pose a
threat and the situation "could get worse
as events unfold", he said.
It is believed that up to 200 British residents
and nationals are currently in the Arab world
and either involved in training camps, being
radicalised or operationally active with terror
groups.
"Today parts of the Arab world have once
more become a permissive environment for
al Qaida," he said.
"A small number of British would be jihadis
are also making their way to Arab countries
to seek training and opportunities for militant
activity, as they do in Somalia and Yemen.
"Some will return to the UK and pose a threat
here. This is a new and worrying development
and could get worse as events unfold.
So we will have to manage the short-term risks
if there is to be a longer-term reward from the
Arab Spring."
Yemen, Libya, Nigeria and Egypt are all
understood to pose a risk.
***
Läs hela talet
Upplagd av hcp kl. 12:00 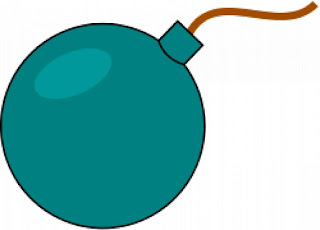 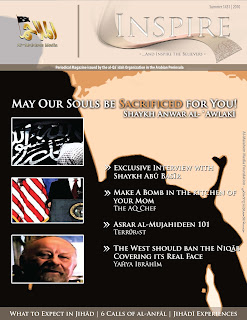 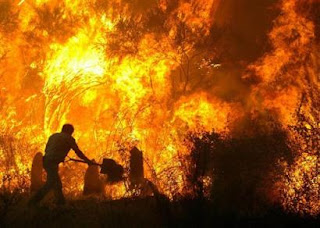 Artikeln ger inget svar på frågan om
skogsbränder redan använts av Al
Qaeda på fler ställen, men alla islamister
uppmanas använda sig av "pyroterrorism"
för att vålla fienden (=Västerlandet)
stora ekonomiska och ekologiska
skador...
**
Examiner:
The men who launched al Qaeda's
English-language magazine "Inspire"
magazine continue to promote jihadi
attacks on Western targets, offering
detailed advice on how to start huge
forest fires in America with timed
explosives and how to build remote-
controlled bombs.
Although the two Muslim terrorists who
launched the Jihadist magazine Inspire
were killed in a U.S. airstrike last fall,
the magazine continues to promote
terrorism against America with its recent
release of issue nine of using fire as a
weapon.
In the magazine, a writer who goes by
the name The AQChef said, "In America,
there are more houses built in the country-
side than in the cities. It is difficult to
choose a better place than in the valleys
of Montana."
**
Although the mainstream media has
reporting has been spotty on this story,
it has caught the eye of the Department
of Homeland Security who wrote up an
unclassified report, that is posted on the
web, on May 31, 2012, which was not
publicly available, until now that outlines
the threats posed by Al Qaeda terrorists
and cells sympathetic to their cause in Al
Qaeda's latest issues of their online maga-
zine that is only available in Jihadist sites.
Statements in the report said that “for at
least a decade, international terrorist
groups and associated individuals have
expressed interest in using fire as a tactic
against the Homeland to cause economic
loss, fear, resource depletion, and humani-
tarian hardship. There is no evidence that
international terrorist groups and inspired
individuals are responsible for any purpose-
ful destruction of public or private property
by setting wildfires in the United States.
Using fire as a weapon, however, is in-
expensive and requires limited technical
expertise, giving it a strong advantage over
other methods of attack.
Statements advocating this tactic are most
often found on violent extremist Web forums
and in violent extremist propaganda.”
**
The report also stated that the ninth issue
of Inspire—“AQAP’s English-language maga-
zine published on 2 May 2012 as the winter
2012 edition—advocates setting wildfires in
the United States to create economic hard-
ship and cause the loss of life of firefighters,
the destruction of property and buildings,
and general psychological distress.
The first issue of Inspire, which AQAP re-
leased in summer 2010, also briefly made
reference to setting fires as a tactic.
We have no indications AQAP or un-
affiliated violent extremists are planning
to act upon the suggestions contained
in Inspire.”
The report also went on to say that on
February 6, 2012, a purported violent
extremist posted a message entitled
“The Top 100 Targets in the United
States” that noted “pyro-terrorism is
perhaps the greatest threat America
has ever faced,” as perpetrators run a
low risk of detection and the posting
urges “pyro-terrorists” to start forest
and grass fires randomly to cause eco-
nomic damage.
While wildfires are presently raging in
western states, the Denver Field Office
of the FBI last month warned the Colorado
and Wyoming law enforcement agencies of
the potential threat that jihadists could
start wildfires as a form of terrorist attack
as a result of the article in the winter issue
of Inspire, a jihadist webzine produced by
al Qaeda in the Arabian Peninsula (AQAP).
As of now, there have been no indications
that the fires in the western part of the U.S.
have been started by terrorists.
Although the “Inspire” magazine had lain
dormant for a while, it was recently
resurrected in 2010, according the Anti-
Defamation League (ADL).
However, issues eight and nine caught
the attention of the seriousness of what
Al Qaeda may be up to.
In a startling statement, the editorial in
the magazine stated:
“To the disappointment of our enemies,
we are still publishing America's worst
nightmare.”
Upplagd av hcp kl. 12:00