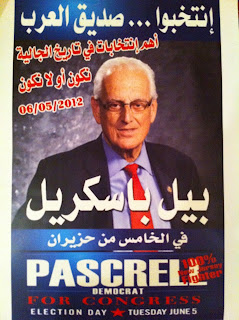 
Rep. Pascrell, who was not available for an interview
for this story, has a long history of support from local
Muslim figures who have made fiery anti-Israel
comments and has aligned himself very closely with
the American Muslim Union, a New Jersey-based
political organization that has called for an end to
U.S. aid to Israel and whose leadership has included
people who have justified Hamas terrorism, accepting
thousands in contributions from the group’s president
and routinely attending the organization’s annual
gathering.
(....)

Pascrell appears to be actively targeting the
Arab and Muslim community, last week
bringing out the first elected Muslim congress-
man, Rep. Keith Ellison (D-MN), who has become
one of the most vocal critics of Israel in Congress.
Since being elected to Congress, Ellison became
even more famous in 2007 for appearing to suggest
that 9/11 was an inside job, saying that he wouldn’t
call the attack a “U.S. plan … because, you know,
that’s how they put you in the nut-ball box —
dismiss you.”
Last week was not the first time Pascrell brought
Ellison to his district. Less than a year after Ellison
compared 9/11 to the Reichstag Fire, Pascrell
arranged for the Muslim congressman to speak to
an audience of 300 at ICPC. According to a March
2008 Herald News account of the event, imam
Mohammad Qatanani, who was already fighting
deportation on terror-related charges, praised
Ellison, remarking, “You are an example for us.”
***
Läs hela artikeln
Upplagd av hcp kl. 12:00