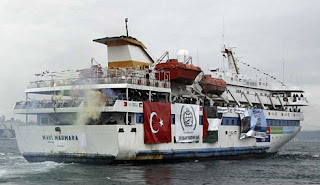 Ledaren för turkiska IHH, Bülent Yilidirim,
har gripits som misstänkt för finansiering
av Al Qaeda. En specialåklagen leder för-
undersökningen. Yilidirim ledde den våld-
samma konvonjen mot Gaza 2010.
**
Haaretz:
The leader of Turkey’s IHH, which organized the 2010
Gaza-bound flotilla, is being investigated on suspicion
of funding al-Qaida through the organization, Turkish
media reported on Friday.
According to the reports, Bulent Yilidirim, the leader of
the Foundation for Human Rights and Freedoms and
Humanitarian Relief, known by its Turkish acronym
IHH, was investigated by a specially appointed pro-
secutor under the suspicion that the organization is
being used to channel funds to al-Qaida.
Yilidirim, who was on board the Gaza-bound
Mavi  Marmara ship, is accused of "providing
financial aid  to al-Qaida via his foundation,"
the daily Hurriyet reported.
**
The reports did not mention the source of the funds
or the al-Qaida cell which was financed.
Yilidirim was among the organizers of the flotilla in
June 2010, aiming to break the Gaza blockade, which
was intercepted by the Israel Defense Forces and resul-
ted in the death of nine Turkish nationals and ten
wounded Israeli commando soldiers.
A few days following the incident, a video of Yilidirim
speaking on board the Mavi Marmara was made public
by Israel's Foreign Ministry. Yilidirim is filmed addres-
sing activists, saying in Turkish:
"If they (Israeli army) board our ship, we will
throw them into the sea, Allah willing!"
***
Läs också
Vem ligger egentligen bakom
Ship to Hamas ?
*
Turkisk antisemit låter som SvT...
Upplagd av hcp kl. 12:00