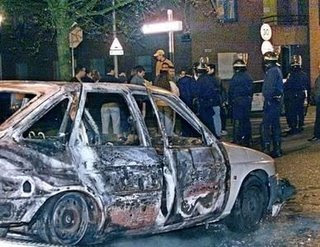 Frankrike grep 89 islamister 2007 och
hittills 55 i år, avslöjade inrikesministern
i veckan. Samtidigt har fängelserna blivit
extremisternas favoritplats för rekrytering.
**
- France has arrested 55 militant Islamists
this year and the country's prisons have become
a favourite recruiting ground for such groups,
Interior Minister Michele Alliot-Marie said in
an interview published on Thursday.
While some Islamists are still travelling to Iraq,
Pakistani and Afghan networks have strengthened,
and "training and indoctrination sites" are now
concentrated in that area, Alliot-Marie said in
an interview with French daily Le Figaro.
**
"I can reveal that 89 Islamist activists were
arrested in France in 2007, and that 55 others
have been arrested on our soil since the start
of the year," she said.
Prisons and some poor suburban neighbourhoods,
many of which house large numbers of families of
African and North African origin, were among
recruiting networks' favoured targets.
"French prisons are a favoured recruiting ground
for radical Islamists. That is one of my concerns,"
Alliot-Marie said.
**
"I have just suggested to my European colleagues
that we create a manual on Islamism in prisons,
to better inform security professionals on how
to detect and prevent this kind of recruitment."
The organisation of al Qaeda has evolved from
a centralised structure to a loose web of cells,
and the nature of their attacks has also changed,
the interior minister said.
***
Läs hela intervjun
Upplagd av hcp kl. 06:00