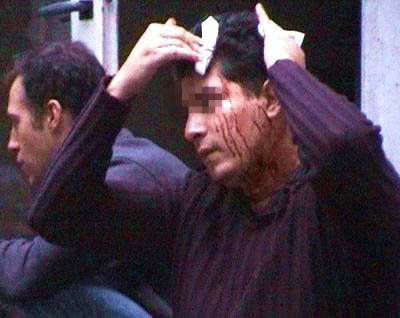 The Bureau of Vigilance against anti-Semitism, a group
monitoring anti-Semitic incidents in France, stressed
the growing feeling of insecurity of Jews living in the
Buttes de Chaumont area in the 19th district of Paris.

The group urged the French capital’s Mayor to reinforce
police forces in the area in view of the upcoming Jewish
High Holidays."
(Philosemitism)

Followers of Not-to-be-Named Religion
Attack Jews In Paris
The Jerusalem Post reports that 10-12 attackers, using
brass knuckles, beat up three Jewish teenagers in Paris
this past Saturday afternoon. Following the lead of
British Prime Minister Gordon Brown, and in the interest
of avoiding intolerance and bias against the religious
group to which the attackers belonged, we will not
mention that religious group in this post.
We request that our readers who follow the hyperlink to
the Jerusalem Post article similarly ignore all mention
of the religion of the attackers, which is a religion known
for preaching peace, love and tolerance, except not
toward members of other religions.
(The Hedgehog Blog)