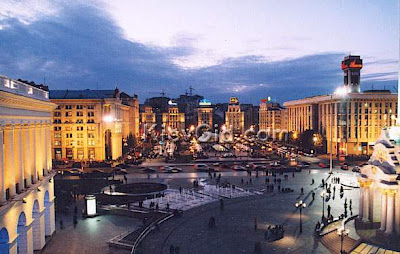 I vår (tyvärr) eviga serie om aktuell
antisemitism har vi nu kommit till
EU-kandidaten Ukraina.
**
Following is a report on anti-Semitism in
Ukraine in 2008, by Irena Cantorovich,
from the Tel Aviv University’s Stephen
Roth Institute for the Study of Contemporary
Antisemitism and Racism.
*
On 24 January 2008 a group of 4 persons
beat Rabbi Dov-Ber Baitman, a teacher at
the Jewish educational center Shiurey
Torah in Dnepropetrovsk, when he
walked out of the central Golden Rose
synagogue after evening classes.
The attackers also shouted antisemitic
insults. In March 2008 it was announced
that the attackers were caught.
*
On 23 May 2008 Dmitro Groisman, a
Jewish human rights activist, was
beaten near his apartment building
in Vinnitsa.
*
On 3 March 2008 swastikas were painted
at the 18th century burial site of Rabbi Levi
Itzhak and on other gravestones at the
Jewish cemetery in Berdichev. On 12 March
2008 the police arrested a 21-year-old suspect,
who is a leader on a local skinhead group.
He was released after 3 days, but not allowed
to leave the area, came to the local synagogue
and promised to pay for the damage.
In June 2008 he was sentenced to a year and
a half imprisonment for desecration of graves.
***
Läs hela artikeln
i European Jewish Press
Upplagd av hcp kl. 16:00