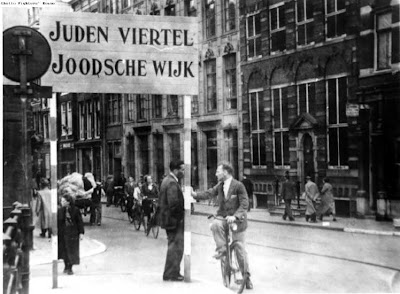 Den senaste dagarna har vi läst om den
ökande antisemitismen i Paris. Det är
tyvärr inget unikt franskt fenomen.
Snarare är det så att den islamistiskt
inspirerade antisemitismen är på stark
frammarsch över hela Europa.
Tidigare har jag bl a skrivit om
Danmark, Norge och Belgien.
Liksom om årsrapporten från Stephen
Roth Institute.
**
Jerusalem Center for Public Affairs har
nu en färsk rapport från Holland:
*
Violence against Jews
Anti-Semitic violence by part of the Muslim community
poses the most important challenge to the Jewish
community. In particular, individuals of Moroccan
ethnicity-most of them Berbers from northern
Morocco-play a disproportionately large role in
physical and verbal violence against the Jewish
community.
There have also been many expressions of anti-
Semitism in mosques. For instance, in 2001 the
El Tawheed mosque had to remove extreme
anti-Semitic statements from its website.
In 2007, it became known that in the Turkish
Milli Görüs mosque in Amsterdam one could
find many journals full of "anti-Western, anti-
democratic and anti-Semitic texts."
Evers relates how, being easily recognizable
as a Jew by his attire, he is regularly insulted
for being a Jew, sometimes by Muslims and
sometimes by autochthonous Dutch. On one
occasion a tram conductor called the police b
ecause Muslims threatened the rabbi.
In conversations with Jews who are recognizable
as such by their physical appearance or clothes,
they frequently mention that they have been
threatened.
Over the past years, anti-Semitic incidents have
occasionally been mentioned in the general press.
Many occur in Amsterdam, where more than half
of Dutch Jewry and an even larger part of those
recognizable as Jews live. In 2003, Rabbi Menachem
Sebbag told the Volkskrant daily that his wife had
been threatened with a screwdriver by a Moroccan
Dutch youngster who said he would cut her heart out.
Sebbag, who understands Arabic, also related that
someone told him in that language:
"I'm going to slaughter you like a pig."
*
Removing One's Kippa
Ruben Vis, secretary of the NIK, the umbrella
organization of the Dutch Ashkenazi community,
was quoted in the same article saying he was
regularly insulted when wearing a kippa in public.
Sometimes he was pushed in the tramway. He noted
that since then he never wears his kippa in the
western and eastern quarters of Amsterdam,
and rarely in the center of the city-places where
there are many Dutchmen of Moroccan descent.
A Jewish leader who visited this author in a hotel
in the southern part of town was wearing a kippa,
but said that in central Amsterdam and neighborhoods
where many Muslims live, he wears a cap.
Another Dutch Jewish leader mentioned how his son,
who wears a kippa, phoned him for help when he
was threatened by young Moroccans.
Motti Wolf, a youngster who has left the Netherlands
and studies at the Hebrew University of Jerusalem,
tells how at the Amsterdam South train station a
group of Dutch Moroccans followed him while shouting
"Jews to the gas." He mentions that one always had
to be alert when wearing a kippa in certain parts of
Amsterdam. Wolf also notes that when he was a student
at the Jewish high school, he preferred not to visit
certain areas where many Muslims live.
If he had to go there, he put on a cap instead of a
kippa.
The mother of another kippa-wearing youngster
who now lives in Israel recounted that her son had
been insulted about ten years ago in an Amsterdam
museum by a group of young Muslim girls who called
out "to the gas." Although kippa wearers are few in
the Netherlands, many of them have similar experiences.
*
Showing and Hiding Identities
Many Muslims insist on displaying their identity in public.
For instance, women wear headscarves and some even
cover their entire face except their eyes. Also, men
increasingly wear djellebas. Yet many Muslims, by
their hostile attitudes, prevent Jews from expressing
their identity in the public square.
The Center for Information and Documentation on Israel
(CIDI) reports that in recent years, about 40 percent
of the more serious anti-Semitic incidents in the
Netherlands have been perpetrated by North Africans,
which in the Netherlands means Moroccans.
The Moroccan community, however, constitutes only
2 percent of the Dutch population.
Dutch Jews often are reluctant to speak about anti-
Semitic experiences in public and exercise self-
censorship. Some younger ones take self-defense
courses. In private conversations, friends sometimes
told this author that when they return from
Israel and take a cab at the airport and the driver
asks what country they are coming from, they often
will not say.
***
Läs hela rapporten
Upplagd av hcp kl. 12:00