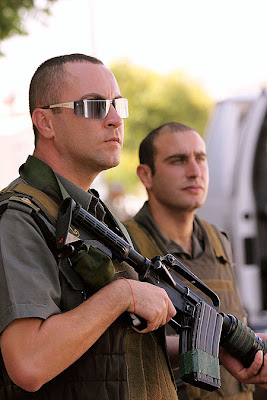 De ständiga antisemitiska överfallen oroar de
franska judarna. Richard Prasquier, ordförande
i CRIF, sammanslutningen av judiska organisationer
i Frankrike, säger“Young Jews are avoiding certain
streets and schools because the risk is growing.
This is unacceptable in the French Republic.”
**
Anti-Defamation League besökte Paris och
manade regeringen till mera aktiva insatser:
“In light of this incident, the previous attack and
the approaching Jewish High Holidays (Rosh
Hashana and Yom Kippur), it is especially
important for the government of France to
ensure that the Jewish community is safe
from harm.”
**
Governmental sources in Jerusalem, commenting
on the attack in Paris, said there are concrete
solutions for these kinds of racial attacks.
"There was a reason for the establishment of Israel,"
said a spokesperson who requested to remain
anonymous.
"It was to provide a safe haven for the survivors
of the Holocaust and to make certain that all Jews,
everywhere were would have a means of defense.
It has been rumored that members of elite Israel
Defense Forces units including Givati, Handasa,
Golani, Paratroops and Border Police have taken
"vacations" abroad and have created ambushes
for racial attacks such as what occurred in Paris.
We are not talking about or suggesting the creation
of vigilante squads from the days of the Jewish
Defense League, but rather elite Israel combat
soldiers in plain clothes working with the Mossad
and other Israel intelligence services to put an end
to these attacks. One must remember that these
attacks also represent a real threat to the stability
of the French government, whose people and police
have also been repeatedly attacked.
But in Jerusalem we are only concerned with the
welfare of both Jews in Israel and abroad.
If the French government cannot protect Jewish
life, the State of Israel will."
***
Israel News Agency
European Jewish Press
Upplagd av hcp kl. 21:00