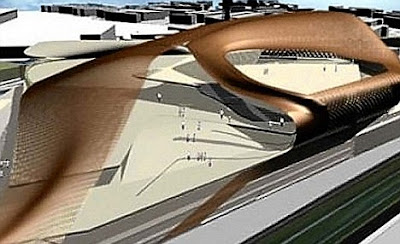 Ministers should review plans to build a
"mega-mosque" in the East End in the
wake of the airline bomb plot trial, the
Tories urged today.
**
Shadow security minister Dame Pauline
Neville-Jones said the case had shown
that the group behind the mosque may
have given cover to extremist activity.
Tablighi Jamaat, which describes itself
an Islamic missionary organisation, is
pushing for the mosque to be built next
'to the 2012 Olympics site in Stratford.
**
But the group was revealed in court as
having links to some of the terror suspects,
with several having passed through other
mosques run by the group.
The organisation, which has 80 million
followers worldwide, insists it is a peaceful,
apolitical revivalist movement that promotes
Islamic consciousness among individual Muslims.
But intelligence agencies have cautioned that
its ability to radicalise young men could lead
to jihadist terrorism.
**
The London Markaz, which some say will
be the largest place of worship in Europe,
has faced criticism of its backers and
allegations of Saudi funding since it was
first mooted three years ago.
The complex will include a three-storey
Islamic centre able to hold at least 40,000
worshippers and up to 70,000 if necessary.
**
The plans will have to go before Newham
council but Mayor Boris Johnson may have
a say and, in theory, it could be called in
by the Government.
Dame Pauline, former chairman of the Joint
Intelligence Committee, said today:
"The news that the terrorists convicted of
the liquid bomb plot attended Tablighi
Jamaat mosques is very disturbing.
This is not the first time this has happened.
'Those convicted of the 7/7 bombings read
Tablighi Jamaat sermons. Tablighi Jamaat
claims to be solely a missionary organisation
with a religious and charitable purpose."
**
But Dame Pauline believes it gives cover
to extremist activity.
She said: 'This must be taken into account
when considering the planning application
for the Tablighi-Jamaat mosque in east London.'
Kafeel Ahmed, who died from burns last year
after trying to set off a car bomb at Glasgow
airport, is among --terrorists whose
radicalisation has been blamed on Tablighi Jamaat.
**
Mohammad Sidique Khan and Shehzad Tanweer,
two of the 7/7 suicide bombers, attended the
European headquarters of Tablighi Jamaat in
Dewsbury, West Yorks, while Muktar Ibrahim,
leader of the failed 21 July bomb plot in 2005,
attended a Tablighi Jamaat mosque in east London.
**
The group belongs to the ultra-conservative
Deobandi branch of Sunni Islam, whose
adherents run more than 600 of Britain's
1,350 mosques.
Critics include the Muslim Educational
Centre of Oxford. It claims the mosque
will attract "religious fundamentalists and
cultural supremacists".
***
Daily Mail