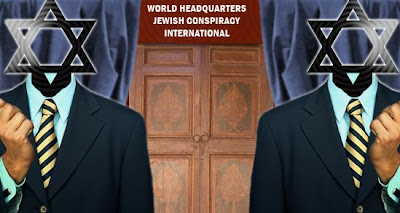 De judiska församlingarnas Community
Security Trust i Storbritannien har granskat
de pågående antisemitiska och antiisraeliska
kampanjerna i landet.
I rapporten
Antisemitic Discourse
in Britain in 2007
konstaterar de bl a
*****
• A poll of antisemitic attitudes showed
the mass potential for antisemitic
conspiracy theories within mainstream
opinion. Half of UK respondents said
it is “probably true” that “Jews are more
loyal to Israel than their own country”;
one third agreed that “American Jews
control US Middle Eastern policy”;
and one-fifth associated Jews with
global business and finance.
**
• Extremists from across the political
spectrum are converging upon
a shared definition of “Zionism”
that relies upon antisemitic themes,
imagery and language, in which
the word “Jew” is now replaced by
“Zionist”. This is demonising language
that depicts Zionism as a great hidden
conspiracy, centred in Israel and the
USA against the rest of humanity:
controlling politicians, media
and finance, and provoking wars
and global foment.
**
• Rhetoric against “Zionist” or “pro-
Israel” lobbies facilitates antisemitism
by casting suspicion against all
mainstream Jewish personalities
and organisations.
**
• Antisemitic discourse was repeatedly
revealed in the trials of British jihadist
terrorists and sympathisers.
**
• The nature and scale of the
internet is facilitating, normalising and
globalising antisemitic discourse on
the websites of mainstream media
outlets that would not otherwise
tolerate antisemitism.
This is a particular problem in the
blogging sections of daily newspapers’
websites and the bookselling sections
of leading retail outlets. Offensive
material may be removed if members
of the public can persuade host
websites to act, but leading
companies are effectively absolving
themselves of proactive responsibility
for what appears on their own sites.
**
• Many supposed anti-racists, including
mainstream journalists and politicians,
scorn and misrepresent mainstream
Jewish community concerns about
antisemitism. This contrasts with their
sympathy for similar fears from other
minority groups. Anti-Israel
campaigners deride mainstream
Jewish community concerns about
the antisemitic content and impact
of their anti-Israel rhetoric and
frequently excuse or deny the
antisemitism of Hizbollah, Hamas
and their UK supporters.
****
Läs hela rapporten
Upplagd av hcp kl. 06:00