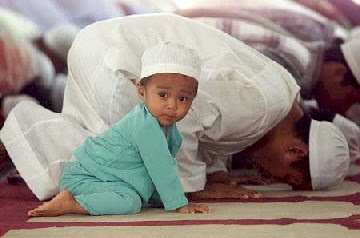 Den schweiziska ETH-högskolan analyserar Sharias
roll i det framtida Europa:
***
In recent weeks, the European Commission
and the UK have made apparent concessions
to Islamic law, and with confrontations in
Cologne over a proposed mosque, the role
of Muslims in a future Europe is again in the
spotlight, writes Simon Roughneen for ISN
Security Watch.
**
Princeton University historian Bernard Lewis made
his famous prediction in 2004:
"Current trends show that Europe will have a Muslim
majority by the end of the 21st century at the latest […].
Europe will be part of the Arab West-the Maghreb."
Similar claims have been made by other authors, with
European countries featuring below-replacement birth
rates, while Muslim immigrants and their descendants
predicted, in some quarters, to reach over 20 percent
of the population of Europe by 2020.
**
A low fertility rate of 1.47 babies per woman, according
to the 2005 estimates for the EU as a whole, is far below
the 2.1 needed to keep a population constant, and with
newspapers reporting "Muhammed" as the most popular
baby's name in London, the swing toward Mecca has
some popular culture branding to match the statistics.
Europe's Muslim population has tripled in the past 30
years, fuelled by immigration from North Africa, Turkey,
Pakistan and Bangladesh.
**
No one knows whether or not he reads Lewis, but not
to be outdone, Libya's Colonel Muammar Gadhaffi
speculated in February 2006 that "we have 50 million
Muslims in Europe. There are other signs that Allah
will grant Islam victory in Europe, without swords,
without guns, without military conquests. The 50
million Muslims in Europe, will turn it into a Muslim
continent within a few decades."
**
Thus an apparently ineluctable demography suggests
that Europe, if it does not automatically become Islamic,
will have to reframe its political and social norms to
address growing and increasingly assertive Muslim
community, which is making its presence felt in Europe's
three largest and most powerful states - Germany,
the UK and France, as well as in Belgium, The
Netherlands and elsewhere, including Russia, which
on current trends will be majority Muslim by 2050.
**
Multiculturalists believe that Muslims can integrate
into Western European culture: As they become
wealthier and more assimilated, Muslims will shed
vestiges of their imported identity and adopt the
ways of their hosts, and a "European Islam" will
form. However, with newspaper reports in the UK
suggesting that Islamic law, or "Sharia," was being
implemented selectively in various parts of the
country, and a dispute over the construction of a
mosque in Cologne leaving the city divided after
a weekend of riots, the debate around Sharia in
Europe, as well as the broader issues of Muslim-
Christian relations in Europe, is once more headline
news with the prospect of continued division looming.
***
Läs resten av artikeln
*****
Ännu är det inte för sent
att skriva under uppropet
STOPP FÖR SHARIA
**
Skriv under och anslut Dig !
Upplagd av hcp kl. 15:00