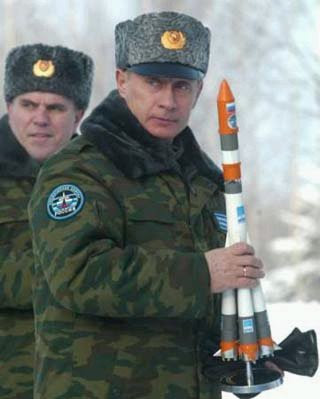 Den franske filosofen André Glucksmann intervjuas
om Putin och den neokommunistiska imperialismen:
**
Russia's August military offensive in Georgia has
drawn strong international condemnation. Some
of the most stinging criticism has come from Andre
Glucksmann, a prominent French philosopher
and Russia watcher.
Glucksmann speaks with Armand Mostofi of
RFE/RL's Radio Farda about Moscow's foreign
policy, Europe's stance, and what the philosopher
describes as "the Putin doctrine."
**
RFE/RL: In an article published recently in
"Le Monde," you praised the European Union's
strong condemnation of Russia's recent military
actions in Georgia and particularly of what you
called "the Putin doctrine."
Please explain what you mean by this reference
to Prime Minister and former President Vladimir
Putin.
*
Andre Glucksmann: We haven't paid enough
attention to what Mr. Putin says; sometimes
he talks very candidly and speaks his mind.
In 2005, he said publicly that the biggest
geopolitical catastrophe of the 20th century
was the Soviet Union's dissolution in 1991.
Is it bigger than the World War I, which
killed 10 million Europeans? Bigger than
World War II, which claimed 50 million
lives worldwide? Bigger than Auschwitz,
than Hiroshima, than the gulag?
This explains Putin's entire policy, his drive
to establish, as much as possible, an
hegemonic power over Russia but also over
close neighbors and former provinces of
the Soviet empire.The second point in
the Putin doctrine has also been spelled
out by him very openly. He said that the
revolutions in Georgia and Ukraine were
expressions of a permanent revolution.
**
This means he is very well aware that since
the first uprising -- that of bricklayers in
Berlin's Stalinallee in 1953 -- the Budapest
and Polish revolts in 1956, the dissidence
of the Russian intellectuals, the Prague Spring
-- all led to the dissolution of the Soviet Union,
that is to say the fall of the Berlin Wall.
So the Putin doctrine seeks to avoid a catastrophe
similar to that of 1991, which would challenge
Putin's power.
That's why he attacks, and that's
why he represents a public danger
for the whole of Europe.
***
Läs hela intervjun på
Radio Free Europe/Radio Liberty
Upplagd av hcp kl. 12:00