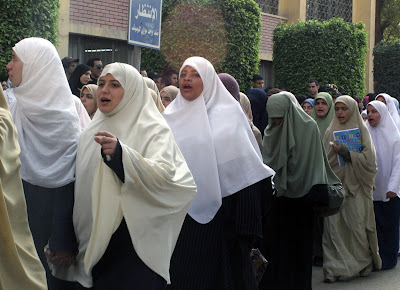 In a sign of its growing prominence,
Indonesia’s Council of Ulemas moved
its headquarters from the basement
of a major mosque here into an expensive
new office tower in the heart of downtown.
The council was established in 1975 as a
quasi-governmental body of Muslim
scholars by Suharto, the country’s leader
for three decades, partly as a tool to keep
politically minded Islamic organizations
in check.
But in the decade since the dictator’s fall,
the group — whose leaders have increasingly
espoused a radical form of Islam — has
worked to establish itself as an assertive
political force.
**
The group, known as M.U.I., built an
impressive network of offices throughout
the country, staffed by people who promote
the council’s view of Islam.
It logged its first major political success
this summer when the government
agreed to severely restrict the activities
of a Muslim sect that does not believe
that Muhammad was the last prophet.
**
Advocates of religious tolerance worry
that the council’s new clout could signal
the start of religious radicalization in a
country known for its moderate brand of Islam.
“Islamists use the M.U.I. as a major base of
operations, coordinating support for the
Islamist agenda,” said Holland Taylor,
founder of LibForAll Foundation, an
American and Indonesian non-
governmental group that promotes
religious pluralism.
Among the goals of some prominent
council members is the imposition of
Shariah, or Islamic law, throughout
traditionally secular Indonesia.
****
Läs artikeln i NYT
Upplagd av hcp kl. 08:00