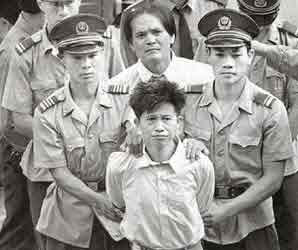 BEIJING (AP) - Chinese police called Tuesday for the
arrest and extradition to China of the alleged leader
of an Islamic terrorist group and seven core members
accused of plotting attacks against the Beijing Olympics.
A Public Security Ministry spokesman said the eight
men, all Chinese citizens, were believed to have
financed, incited and organized attacks during and
around the Aug. 8-24 games as part of an ongoing
insurgency against Chinese rule in the traditionally
Muslim west.Wu Heping told reporters at a news
briefing that the men were members of the East
Turkestan Islamic Movement, a murky
collection of extremists believed to be based
across the border in lawless areas of Pakistan
and Afghanistan.
(.........)
A news release issued at Wu's press conference
offered basic biographical information about the
men and vague claims about their alleged terrorist
activities. Photographs of seven of the eight men
were also included.It identified one man, 37-year-
old Memetiming Memeti, as the leader of the
movement, saying he had joined the group in an
unidentified South Asian country after leaving
home in 1998 and assumed the leadership after
its former chief was killed in a skirmish with
security forces in Pakistan in 2003.
Others accused include 33-year-old university
graduate Tuersun Toheti, a bomb maker
blamed for planning attacks on Chinese targets
outside the country.The release did not link the
men to specific incidents, although one of them
bore the alias «Saifula» that was also used by
a man shown issuing threats against the Olympics
on a videotaped messaged released in July.
In the video, a masked man speaking Uighur claimed
responsibility for a bus bombing in the Chinese city
of Kunming and warned spectators and athletes,
«particularly the Muslims,» not to attend the Olympics.
***
Läs hela artikeln
****
Läs EastTurkestan.net
Upplagd av hcp kl. 12:00