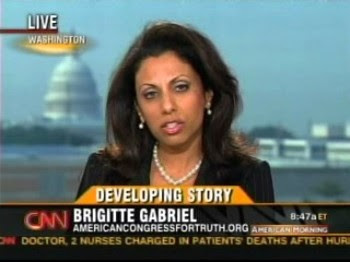 Brigitte Gabriel, kristen libanesisk författare och
debattör, berättar om sin barndom och hur hon
upptäckte de stora kulturskillnaderna mellan
Israel och arabvärlden:
"The difference between the Arabic world and Israel
is a difference in values and character. It's barbarism
versus civilization. It's democracy versus dictatorship.
It's goodness versus evil."
**
***
Se hela hennes serie med åtta filmer
ISLAM UNVEILED
***
Brigitte Gabriel: When the Moslems and Palestinians
declared Jihad on the Christians in 1975, they
started massacring the Christians, city after city.
I ended up living in a bomb shelter underground from
age 10 to 17, without electricity, eating grass to live,
and crawling under sniper bullets to a spring to get water.
**
It was Israel who came to help the Christians
in Lebanon. My mother was wounded by a Moslem's
shell, and was taken into an Israeli hospital for treatment.
When we entered the emergency room, I was shocked at
what I saw. There were hundreds of people wounded,
Moslems, Palestinians, Christians, Lebanese, and Israeli
soldiers lying on the floor. The doctors treated everyone
according to their injury. They treated my mother before
they treated the Israeli soldier lying next to her. They didn't
see religion, they didn't see political affiliation, they
saw people in need and they helped.
**
For the first time in my life I experienced a human quality
that I know my culture would not have shown to their
enemy. I experienced the values of the Israelis, who
were able to love their enemy in their most trying moments.
I spent 22 days at that hospital. Those days changed my
life and the way I believe information, the way I listen to
the radio or to television. I realized I was sold a fabricated
lie by my government, about the Jews and Israel, that was
so far from reality. I knew for fact that, if I was a Jew
standing in an Arab hospital, I would be lynched and thrown
over to the grounds, as shouts of joy of Allahu Akbar,
God is great, would echo through the hospital and
the surrounding streets.
*****
Upplagd av hcp kl. 08:00