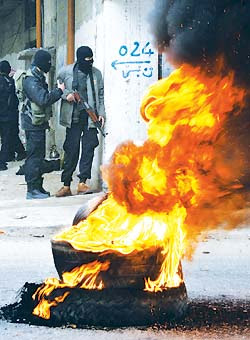 Det blir allt vanligare att demokratins
fiender missbrukar den lagstiftning som
en gång skapats för att skydda demokrati
och yttrandefrihet.
**
Jag har tidigare skrivet om hur en av terror-
finansiärerna i Gyllene Kedjan systematiskt
missbrukar brittiska domstolar för att stoppa
all kritik av hans terrorfinansiering.
Företeelsen har t o m fått ett eget namn: libel
tourism .
**
Nu är ett nytt sådant fall på gång:
Support Harry’s Place Blogburst
Harry’s Place, a UK blog dedicated to
promoting the ideals of freedom and
democracy, is being sued by Mohammed
Sawalha, the President of the British
Muslim Initiative, which has been linked
to Hamas and the Islamic Brotherhood,
both terrorist organizations.
The blog reports that Mr. Sawalha, according
to the BBC…
“master minded much of Hamas’ political
and military strategy” and in London “is
alleged to have directed funds, both for
Hamas’ armed wing, and for spreading its
missionary dawah”.
In their revelation of the impending lawsuit
against them leveled by Mohammed Sawalha,
they write:
Mr Sawalha claims that we have “chosen a
malevolent interpretation of a meaningless
word”. In fact, we did no more than translate
a phrase which appeared in an Al Jazeera
report of Mr Sawalha’s speech. When Al
Jazeera changed that phrase from “Evil Jew”
to “Jewish Lobby”, we reported that fact,
along with the statement that it had been a
typographical error.
Mr Sawalha has been the prime mover in
a number of Hamas and Muslim Brotherhood
associated projects.
He is President of the British Muslim Initiative.
He is the past President of the Muslim Association
of Britain. He was the founder of IslamExpo,
and is registered as the holder of the IslamExpo
domain name.
He is also a trustee of the Finsbury Park Mosque….
…Mr Sawalha says that the attribution of the phrase
“Evil Jew” to him implies that he is “anti-semitic
and hateful”. Notably, he does not take issue with
our reporting of the revelation, made in a Panorama
documentary in 2006, that he is a senior activist
in the clerical fascist terrorist organisation, Hamas.
It looks like Harry’s Place is going up against some
pretty top-notch lawyers on this one, and they’ve
got guts, but as the post goes on to say:
If Mr Sawalha persists in attempting to silence us
with this desperate legal suit, we will need your help.
We won’t be able to stand up to them alone.
This is why we’ve started this blogburst, to get
the word out that we won’t let members of Hamas
or any radical terrorist group censor us or any of
our fellow bloggers.
If you’d like to add your site to the blogroll,
simply email us at admin@neoconstant.com,
and include your site’s URL.
**
Jihad i Malmö ställer även denna gång
upp för demokrati och yttrandefrihet
mot islamism och censur.
*****
UPDATE:
Mera bakgrund om fallet:
Why Harry’s Place Deserves Our Support
Antisemite sues bloggers
UK Blogger Sued by Hamas
HAMAS OPEN NEWS FRONT ON BLOGGERS:
LAWFARE JIHAD
***
Upplagd av hcp kl. 11:00