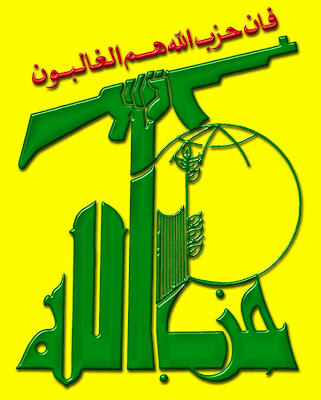 Så här när Hizballah solar sig i
den kommande frigivningen av
monstret Samir Kuntar (som inte
är shia-islamist utan drusisk
kommunist....) kan det vara
lämpligt att lyssna
på varnande röster:
ABC News
Intelligence agencies in the United
States and Canada are warning of
mounting signs that Hezbollah,
backed by Iran, is poised to mount
a terror attack against "Jewish targets"
somewhere outside the Middle East.
**
Intelligence officials tell ABC News
the group has activated suspected
"sleeper cells" in Canada and key
operatives have been tracked moving
outside the group's Lebanon base
to Canada, Europe and Africa.
Officials say Hezbollah is seeking
revenge for the February assassination
of Hezbollah's military commander,
Imad Mugniyah, killed by a car bomb
in Damascus, Syria.
The group's leaders blamed Israel,
an allegation denied by Israeli officials.
**
There is no credible information on
a specific target, according to the
officials.
Suspected Hezbollah operatives
have conducted recent surveillance
on the Israeli embassy in Ottawa,
Canada and on several synagogues
in Toronto, according to the officials.
There is no credible information on
a specific target, according to the officials
**
Latin American is also considered a
possible target by officials following
Hezbollah's planning.
A senior US counter-terrorism official
told ABC News,
"There are concerns Hezbollah might
be ready to do something along
those lines."
*****
Treasury Targets Hizballah in Venezuela
Washington - The U.S. Department of the Treasury
today designated two Venezuela-based supporters
of Hizballah, Ghazi Nasr al Din and Fawzi Kan'an,
along with two travel agencies owned and controlled
by Kan'an.
"It is extremely troubling to see the Government of
Venezuela employing and providing safe harbor
to Hizballah facilitators and fundraisers. We will continue
to expose the global nature of Hizballah's terrorist
support network, and we call on responsible governments
worldwide to disrupt and dismantle this activity,"
said Adam J. Szubin, Director of the Office of
Foreign Assets Control (OFAC).
*****
(The Washington Institute)
Hizballah is particularly active in Europe, where
it is engaged in financial and logistical support
operations as well as political activities meant to
legitimize itself in the eyes of the West. Although
the organization has not conducted terrorist attacks
in Europe for many years, it is still active in the region,
primarily using Europe as a fundraising and recruiting
ground. A recently released German intelligence
assessment estimated that 900 Lebanese Hizballah
members (an increase of 100 from previous reports) live
in Germany alone. Hizballah has also used Europe as
a launching pad for sending operatives into Israel
to conduct surveillance and attacks.
****
(Jerusalem Post)
Hizbullah "sleeper" terror cells set up outside Lebanon
with Iranian assistance have been put on standby
The Jerusalem Post learned on Sunday, and are likely
planning attacks against Jewish and Israeli targets
throughout the world.
**
The Shin Bet (Israel Security Agency) confirmed to
the Post Sunday night that it had instructed embassies,
consulates and Jewish institutions it was responsible for
abroad to raise their level of awareness in light
of the conflict in the North.
The assumption within Military Intelligence is that
Hizbullah would only attack targets abroad if it felt
pushed into a corner. According to this thinking, the
Islamist group hesitates to carry out such attacks
because it does not want to be associated with
Global Jihad and al-Qaida.
**
Hizbullah has attacked Jewish and Israeli targets
abroad in the past. The organization is believed
to have been behind the attack on the Israeli Embassy
in Buenos Aires in 1992 during which a suicide bomber
drove a pick-up truck filled with explosives into the building,
killing 29 people and wounding 242, following Israel's
assassination of the group's leader at the time,
Sheikh Abbas Musawi.
**
Hizbullah is also thought to have been responsible
for the attack on the Argentine Israelite Mutual Association
building in Buenos Aires in 1994, when an explosives-laden
van rammed into the structure and killed 85 people.
Another attack attributed to the group was the 1985
hijacking of TWA flight 847. One passenger was murdered;
the remainder of the hostages were released
over a two-week period.
****
Upplagd av hcp kl. 06:00