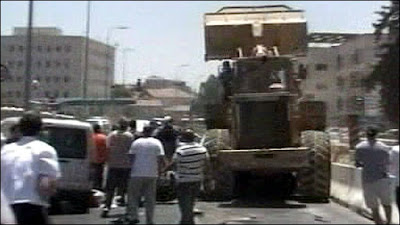 Two People Injured in
Bulldozer Terrorist Attack
(IsraelNN.com) A bulldozer driver tried to
mow down people on King David Street shortly
after 2 p.m. Tuesday (7 a.m. EDT) when a citizen
and policeman shot and killed him before he
caused any deaths. At least two people suffered
moderate injuries. Two vehicles sustained damage.
Motorists are warned to stay away from the area
of the incident, near Keren HaYesod Street
and Gan Pamonim.
***
UPDATE:
(IsraelNN.com) The tractor terrorist who tried to
murder Jews in Jerusalem shortly after 2 p.m.
is a close relative of a Hamas legislator who is in
jail on suspicion of being involved in terrorism.
Censors have prohibited the media from publishing
his name at this time.He is a resident of the Arab
village of Um Tuba in eastern Jerusalem and
within the separation barrier.
***
(IsraelNN.com) Eleven people are being treated
for physical injuries and shock after an Arab
tractor driver smashed a bus and at least
two cars and tried to overrun pedestrians before
he was killed by an alert citizen and a Border Patrol
policeman. One person suffered moderate to
serous injuries in his back, and four others
suffered light wounds.
***
UPDATE 2:
Second Palestinian bulldozer rampage
injures 24 on Jerusalem main street
Debka File
July 22, 2008, 4:13 PM (GMT+02:00)

Injured evacuated from second Palestinian
bulldozer rampage. A quick-thinking passing civilian
and a border guard shot the driver dead after
five vehicles and a bus were rammed opposite the
Liberty Bell Park on King David Street, 200 yards from
King David Hotel where UK premier Brown stayed
Monday. Twenty-four people were injured,
one seriously. Two are children.
The bulldozer burst out of a nearby building
site in Yemin Moshe. The terrorist was Ghassen
Abu Tir, 22, from Umm Tuba, a Palestinian village
in southeast Jerusalem, who was employed at the
building site. He was a relative of Muhammed Abu Tir,
a Hamas lawmaker held in an Israeli jail.
The Hizballah-sponsored Galilee Liberation Brigades claimed
this attack like the first bulldozer rampage of July 2
when another Jerusalem Palestinian killed
three people and caused heavy damage
on Jerusalem’s Jaffa Street.
Upplagd av hcp kl. 14:14