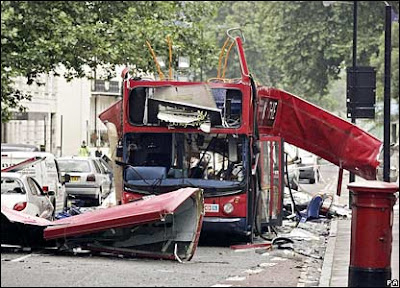 In Leeds a young white man who adopted a
radical Islamic creed planted a hoax bomb
on a bus after becoming excited by graphic
images of terrorist violence, a court was told
yesterday.
**
Nicholas Roddis, 22, is alleged to have worn a
false black beard to board a packed bus before
leaving behind a carrier bag packed with nails,
wire and a working clock. Inside the bag was a
message, purporting to be from the al-Qaeda
leadership in Iraq, that proclaimed that there
was “no god but Allahu”, adding: “Britain must
be punished.”
**
When police raided Mr Roddis’s flat in Bramley,
near Rotherham, South Yorkshire, they found
bombmaking ingredients, including chemicals,
nails and detonators, Edward Brown, QC, for
the prosecution told the jury at Leeds Crown
Court. A search of his telephone and computer
uncovered videos and messages “celebrating
terrible atrocities” carried out by jihadist
extremists.
***
Läs hela artikeln
Upplagd av hcp kl. 05:00