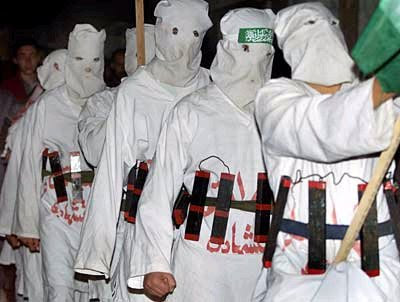 Nu klämtar klockan kanske för terrorstiftelsen
Al-Aqsa Spannmål på Nobelvägen 79 i Malmö ??
Defense Minister Ehud Barak recently signed an order
declaring 36 funds around the world, members of the
"Union of Good" organization, to be banned associations
in Israel since they are part of Hamas's fundraising
network, and both support and assist it.
**
This order, the broadest and most comprehensive
ever issued in Israel, joins a series of previous
declarations against overseas charity organizations that
belong to the "Union of Good" and Hamas, including Interpal
in the UK, branches of the Al Aqsa Foundation in Europe,
the Holy Land Foundation in the US, the World Assembly
of Muslim Youth (WAMY) in Saudi Arabia, and additional
foundations in Turkey, Qatar, South Africa, Austria, Jordan,
France, the Netherlands, Italy, Denmark, Sweden
and other countries.
**
This is a significant step against the global network
which assists Hamas in raising funds. The order outlaws
a great number of bodies that are active abroad and
which are responsible for raising very large sums for
Hamas activities in Judea, Samaria and the Gaza Strip.
The "Union of Good" is, in effect, a roof organization
for foundations operated by Hamas around the world,
especially in Europe and the Persian Gulf countries. It was
outlawed by the Defense Minister in 2002 for its
massive support of Hamas.
**
The Union is composed of dozens of extremist
Islamic foundations around the world. WAMY is
especially active in the Persian Gulf countries and in
Africa. The activity of Hamas foundations in Europe
are led by Interpal in the UK, branches of the Al-Aqsa
Foundation and the Committee for Welfare and Aid
for the Palestinians (CBSP) in France.
**
Dozens of foundations that are operated abroad by Hamas,
most of which are members of the Union of Good,
along with dozens of Hamas charitable associations active
in Judea, Samaria and the Gaza Strip, form a well organized
and coordinated support network, that includes Hamas's
fundraising arm abroad and the vital civilian and
infrastructure networks in Judea, Samaria and the
Gaza Strip. In this framework, tens of millions of dollars
per annum are transferred from the overseas foundations
to Hamas associations in the field.
**
Recently, it has become clear that Union-affiliated
foundations are trying to raise funds not only for
Hamas charitable associations in Judea, Samaria and
the Gaza Strip, but for the activities of the Hamas
government as well. The Chairman of the Union of
Good is the infamous Sheikh Yusuf al-Qaradawi.
**
Several steps have been taken so far, in Israel and
abroad, against foundations, associations and activists
connected to Hamas's global fundraising network,
including the banning of the Al-Aqsa Foundation
in Germany and the Netherlands, the conviction
of senior Islamic Movement officials over their
links with the Union for Good and Hamas foundations, and
the conviction of a Hamas-affiliated charity in A-Ram.
**
There is no doubt that, in light of its scope, this
significant declaration will require the Israeli and
world banking and financial systems to prepare
accordingly and act with caution in order to avoid
criminal actions or civil lawsuits by victims of terrorism,
such as that against the Arab Bank, in the US.
*****
Läs om
Al-Aqsa Spannmålsstiftelse i Malmö
***
Gudmundson kommenterar
Israel slår mot Al Aqsa Spannmål i Malmö
Upplagd av hcp kl. 16:00