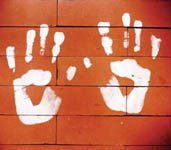 "Violence is only one of the tools used
by extremist Islamists in the broader
"war of ideas" against Western liberal
democracy. Winning the war against
terrorism is not possible unless, as
the 9/11 Commission Report correctly
stated, the U.S. "prevail[s] in the longer
term over the ideology that gives rise
to Islamist terrorism."
In order to succeed, we must first come
to understand the roots of this ideology:
namely, Islamism."
**
Det berättade Zeyno Baran från
Hudson Institute, ett av vittnena
vid senatens Homeland Security-utskotts
hearing i torsdags. Under ordförandeskap
av den stridbare senator Lieberman håller
man en antal förhör kring det viktiga ämnet:
The Roots of Violent Islamist Extremism
and Efforts to Counter It
**
Baran: "Although various Islamist groups
quarrel over means (and often bear con-
siderable animosity towards one another),
they all agree on the endgame: a world
dictated by political Islam.
While many do not openly call for violence
or terrorism, they provide an ideological
springboard for future violence."
**
" The prime example of these groups is
the Muslim Brotherhood (MB). Founded
in 1928, MB is the first modern Islamist
movement; out of it have come numerous
splinter groups, which in turn have given
rise to yet more splinter groups.
Consequently, there has been an exponential
growth of fairly radical Islamist organizations
active all over the world, including in
cyberspace."
**
"Over the 60 years since its founding
in Egypt, MB has spread across the
Middle East and expanded into every
corner of the world. The tactics of the
Muslim Brotherhood may be non-
violent in the West, and less violent
than other groups in the Muslim world,
but the ideology behind those tactics
remains fundamentally opposed to
the Western democratic system
and its values. The worldview MB
promotes can lead those exposed
to it become excited to the point of
engaging in violence. For example,
Khaled Sheikh Mohammed, master-
mind of the September 11 terrorist
attacks, told US interrogators that
he was first drawn to violent jihad
after attending Brotherhood youth
camps".
Upplagd av hcp kl. 10:00