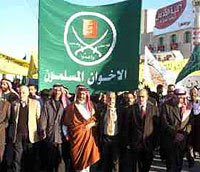 Anledningen är helt enkelt att MB fått en
alltmera central roll som ”alla muslimers
språkrör" i EU-Europa…..
**
"Challenging the establishment, in fact,
is not the current policy of the European
Brotherhood. Realizing they are still a
relatively weak force, the Brothers
have opted for a different tactic:
befriending the establishment.
They are taking advantage of the
European elite’s desperate desire
to establish a dialogue with any
representatives of the Muslim
community, and they are putting
themselves forward as the de facto
voices of European Muslims. '
Thanks to the Europeans’ naïveté and
their own activism, the Brothers are
now the closest partners that European
political elites have in discussing the
integration of the local Muslim communities.
Nowhere is this more evident than in
Brussels, where Ikhwan organizations
have become the only officially recognized
representatives of the European Muslim
population, monopolizing the debate
with the institutions of the European Union.
**
In 1989 the European Brothers founded
the Federation of Islamic Organizations
in Europe (FIOE), with the stated goal
of “serving Muslims in European societies.”
Even though it has gained prominence
in Europe as a moderate Muslim organization,
however, FIOE is nothing more than the
umbrella organization for most Ikhwan
groups in Europe. Its founders and main
members are the French UOIF, the German
IGD and the British MAB, and its head-
quarters are in Markfield, located in
spaces leased from the Islamic Foundation.
Serving on FIOE’s board are such prominent
European Ikhwan figures as UOIF’s Ahmed
Djaballah and IGD’s Ibrahaim El Zayat.
Its president, Ahmed al Rawi, has personally
defended suicide bombings in Iraq and Israel,
claiming that Muslims “have the right to
defend themselves.” And yet he is a habitué
of the European circles of power, having
testified before the European Parliament
and attended John Paul II’s funeral.
**
In 1996 FIOE created the European Trust,
a financial institution devoted to raising
funds for its various activities, such as
the sprawling European Institute of
Human Sciences, the Association of
Muslim Schools in Europe, and its glossy
magazine Al Europiya.
Also in 1996, in cooperation with the
Saudi WAMY, FIOE established a youth
branch—the Forum of European Muslim
Youth and Student Organizations (FEMYSO).
Originally headed by the ubiquitous El
Zayat and strategically headquartered
in Brussels, FEMYSO has managed to
become, in its own words, “the de facto
voice of the Muslim youth of Europe.”
Today it oversees a network of thirty-
seven member organizations, and it
enjoys regular relations with the European
Parliament, the Council of Europe, and
the United Nations."
*****
Läs hela artikeln
Aims and Methods of
Europe's Muslim Brotherhood
av Lorenzo Vidino
(Current Trends in
Islamist Ideology vol. 4)
Upplagd av hcp kl. 08:00