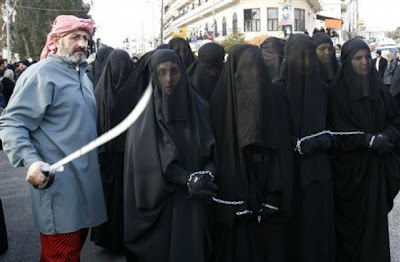 ” The Muslim Brotherhood's ample funds and
organization have contributed to their success
in Europe. But their acceptance into mainstream
society and their unchallenged rise to power
would not have been possible had European
elites been more vigilant, valued substance
over rhetoric, and understood the motivations
of those financing and building these Islamist
organizations.
**
Why have Europeans been so naïve? Bassam
Tibi, a German professor of Syrian descent
and an expert on Islam in Europe, thinks
that Europeans—and Germans in particular—
fear the accusation of racism. Radicals in
sheep's clothing have learned that they
can silence almost everybody with the
accusation of xenophobia. Any criticism of
Muslim Brotherhood-linked organizations
is followed by outcries of racism and anti-
Muslim persecution. Journalists who are
not frightened by these appellatives are
swamped with baseless and unsuccessful
but expensive lawsuits.
**
In some cases, politicians simply fail to
check the backgrounds of those who
claim to be legitimate representatives
for the Muslim community. As in the
United States, self-described represent-
tatives for the Muslim community are
far more radical than the populations they
represent. In other cases, politicians
realize that these organizations are not
the ideal counterparts in a constructive
dialogue but do not take the time to seek
other less visible but more moderate
organizations, several of which exist only
at the grassroots level, impeded by
financial constraints.
**
What most European politicians fail to
understand is that by meeting with
radical organizations, they empower
them and grant the Muslim Brotherhood
legitimacy. There is an implied endorse-
ment to any meeting, especially when
the same politicians ignore moderate voices
that do not have access to generous Saudi
funding. This creates a self-perpetuating
cycle of radicalization because the greater
the political legitimacy of the Muslim
Brotherhood, the more opportunity it
and its proxy groups will have to
influence and radicalize various European
Muslim communities.
The ultimate irony is that Muslim Brother-
hood founder Hassan al-Banna dreamed
of spreading Islamism throughout Egypt
and the Muslim world. He would have
never dreamed that his vision might also
become a reality in Europe.”
****
Läs hela artikeln
The Muslim Brotherhood's
Conquest of Europe
av Lorenzo Vidino
(Middle East Quarterly
Winter 2005)
artikeln översatt till
danska
Upplagd av hcp kl. 09:00