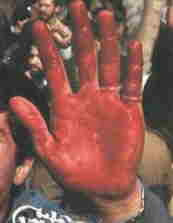 Rudy Haddad har vaknat ur sin
coma och hans allmäntillstånd är
bättre. Däremot har han allvarliga
problem med minnet.
Samtidigt inställer sig många frågor
kring mediernas och myndigheternas
behandling av fallet.
Chesler Chronicles har gjort en bra
sammanfattning:
"Now, a visibly Jewish, kipah-wearing
17 year-old, Rudy Haddad, walking in
a Jewish quarter, was set upon by 15-30
“African immigrants.” No one is saying
whether they are Muslims or not. Alright,
Martians from Africa beat Haddad with
iron bars and fractured his skull. Haddad,
like Halimi, and like their attackers, are also
of African or possibly Arab descent–as was
Sebastien Selam who was murdered in Paris
in 2003. Haddad has just come out of a medically
induced coma. According to a Jewish Telegraphic
Agency report:
“While French officials were quick to condemn
the attack, most fell short of identifying the
crime as anti-Semitic, saying the police first
needed to complete their ongoing investigation.
French President Nicolas Sarkozy told reporters
while visiting Israel this week that he was
“particularly shocked by what happened to a
young French boy, on the pretext that he was
wearing a kipah,” the AFP news agency reported.
In an initial presidential statement Sunday,
Sarkozy denounced the attack but did not draw
such conclusions.” Read the JTA REPORT, HERE.
**
However, various representatives of the French
Jewish community have denounced this horrific
crime as “anti-Semitic” which, when last I checked,
is also considered a form of racism.
So, where are all the anti-racists now?
I hear no condemnations. The silence is chilling.
And all too predictable. Where are the mainstream
media? Where is FOX, CNN, MSNBC, and the
International Herald Tribune? (Only ABC ran a
Reuters’ 190 word story earlier today). When I
googled this story, the first three pages consisted
of stories filed by small bloggers and mainly by
Jewish and Israeli media. (Military Photos carried
a story as well). But where are The Washington
Post, The Los Angeles Times, The New York Times?
For heaven’s sake: Where is Le Soir, Le Monde,
and Figaro? Has France’s Channel 2 covered this?"
Upplagd av hcp kl. 09:00