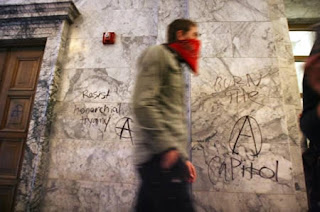 En Marockofödd dansk medborgare greps
nyligen under en resa till hemlandet. Enligt
polisen tillhörde han en islamistisk grupp
som planerade bombattentat i Marocko
berättar Jyllands-Posten.
**
Moroccan police have arrested a Danish citizen on
terror charges, according to the Associated Press.
The Dane, who is of Moroccan descent, was arrested
along with two other men for having planned terror
attacks against the Moroccan state.
The three suspects are believed to be members of
a terror organisation going by the name the Party
for Moroccan Islamic Liberation.
According to Morocco’s Interior Ministry, the Danish
citizen travelled to Morocco to supervise the
execution of a plan that aimed to “undermine the
country’s security and stability” by recruiting
“indoctrinated” people.
Authorities believe the terror cell is financed by
supporters in Europe.
“They spread their nihilistic theses in brochures
that they distribute in Moroccan cities,” the
Moroccan Interior Ministry said in a statement.
They set a question mark on the entire democratic
process and they encourage subversive activity.”
As of this morning, there was no statement from
the Foreign Ministry or PET relating to the arrest.
Attempts to find additional details about the arrestee
through the Moroccan news bureau Arabe Presse,
could only confirm that a Danish citizen had been arrested.
This is not the first time a Dane has been involved
in a terror case in Morocco. Omar Maarouf, a Danish-
Moroccan citizen, has been condemned to death
for 2003 charges of attempted murder and an
attempted bombing.
***
Fler marockanska terrorister
med Sverigekoppling gripna
*
Svensk-marockanska terroristnyheter
*
Vårsallad med uppföljningar
*
Mahdins Soldater krossas i Marocko
*
Marockanska terrornätverk i Sverige
Upplagd av hcp kl. 13:00