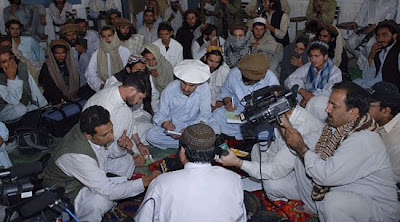 "With great fanfare, the Pakistani Army flew journalists to a rugged corner of the nation's lawless tribal areas in May to show how decisively it had destroyed the lairs of the Taliban, including a school for suicide bombers, in fighting early this year.

Then, just days later, the usually reclusive leader of the Pakistani Taliban, Baitullah Mehsud, held a news conference of his own, in the same region, to show just who was in charge.

He rolled up in an expensive-looking Toyota pickup packed with heavily armed Taliban fighters, according to the Pakistani journalists invited to attend. Squatting on the floor of a government school, Mehsud, clasping a new Kalashnikov, announced he would press his fight against the American military across the border in Afghanistan.

"Islam does not recognize boundaries," he told the journalists, in accounts published in Pakistani newspapers and reported by the BBC. "There can be no deal with the United States."

Mehsud's jaunty appearance in his home base, South Waziristan, a particularly unruly region of Pakistan's tribal areas, underscored the wide latitude Pakistan's government has granted the militants under a new series of peace deals, and its impact in Afghanistan, where NATO and American commanders say cross-border attacks have surged since talks for those peace deals began in March."