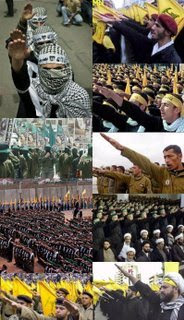 En bok som krossar myten om
ett "tolerant" islam som levat i
samförstånd med judar (och kristna):
***
Were Jews living in Islamic societies
victims of antisemitism? If so, to
what extent? How did conditions for Jews
in the Moslem East compare with those
in Christian Europe? Is Islam intrinsically
antisemitic? Are today's Moslems more
antisemitic than those of the past and
if so, why? These questions have been
the subject of vigorous discussion over the
past few decades.
*
Andrew Bostom's new book,
The Legacy of Islamic Antisemitism:
From Sacred Texts to Solemn History,
brings massive evidence to show that
Jews suffered greatly in Moslem societies
due to an antisemitism intrinsic to the
Moslem religion. In this he goes against
the commonly held belief that Jews under
Islam suffered relatively little for being
Jewish and that Islam itself is relatively
tolerant, ideas put forward by the philosophes
of the Enlightenment as part of their battle
with the Catholic Church, by Jewish historians
who contrasted a mythical Muslim past
with their own lachrymose conception
of the history of their own people in
Christian Europe and by contemporary
historians of Islam, many of whom tend
to view Moslem antisemitism through
rose-colored glasses.
*
The Legacy of Islamic Antisemitism
is a large collection of a broad range
of readings from a paragraph to
several pages in length, smoothly joined
together by Bostom's own writing. Included
are the portions of Islamic scriptures
relating to Jews, writing of Moslem scholars,
preachers and rulers, writing of Jews who
lived in Moslem societies and the reports
of Jewish and gentile visitors to Moslem
societies as well as writing of Western
scholars who have studied various aspects
of the experience of Jews in Islam."
***
Läs hela artikeln i American Thinker
*
Jihad Watch om boken
Upplagd av hcp kl. 19:35