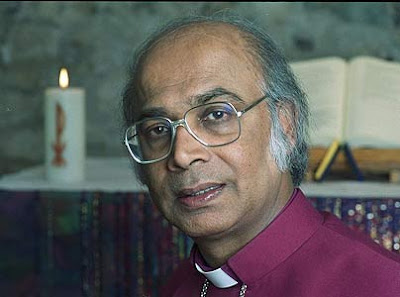 "Dr Nazir-Ali claims in the new article that Britain, previously a "rabble of mutually hostile tribes", would never have become a global empire without the arrival of Christianity.

But he said the Church's influence began to wane during the 1960s, and quotes an academic who blames the loss of "faith and piety among women" for the steep decline in Christian worship.

He says Marxist students encouraged a "social and sexual revolution" to which liberal theologians and Church leaders "all but capitulated".

"It is this situation that has created the moral and spiritual vacuum in which we now find ourselves. While the Christian consensus was dissolved, nothing else, except perhaps endless self-indulgence, was put in its place."

The bishop, who faced death threats earlier this year when he said some parts of Britain had become "no-go areas" for non-Muslims, said Marxism has been exposed as a nonsense but went on: "We are now confronted by another equally serious ideology, that of radical Islamism, which also claims to be comprehensive in scope."

"It is necessary to understand
where we have come from, to
guide us to where we are going,
and to bring us back when we
wander too far from the path
of national destiny."
Rt Rev Michael Nazir-Ali