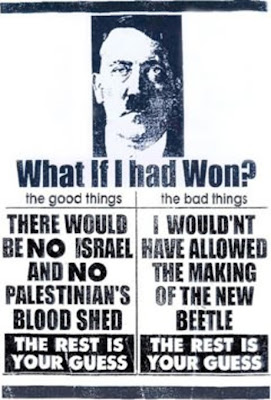 On May 27, 2008 states negotiating
the substance and procedure of the
Durban Review Conference/Durban II
revealed the anti-Israel agenda
in the first "non-paper" outlining issues
intended to be discussed.
The non-paper was released
in Geneva during the first meeting
of the "Intersessional open-ended
intergovernmental working group
to follow up the work of the
Preparatory Committee for the
Durban Review Conference.
**
"Under the subject "Victims of
racism, racial discrimination, xenophobia
and related intolerance", the "victims
identified" by an intergovernmental
working group include "the Palestinian
people under foreign occupation."
The paper suggests that the "vulnerability"
of Palestinians "is connected to racial
or ethnic distinction from the occupying
power."In other words, Palestinians are
victims of Israeli racism. This is the recast
UN formulation of the 1975 General Assembly
resolution declaring 'Zionism is racism'.
**
Durban II is intended to implement the
Durban Declaration and Programme of
Action adopted on September 8, 2001
and that Declaration included a statement
singling out Israel as guilty of racism against
Palestinians.Leading the effort to once
again isolate Israel, and demonize the Jewish
state as racist, are Iran and Egypt.
**
In the section "Other contemporary forms
of racism as reported by different countries"
Iran pointed to "the situation in the Occupied
Palestinian Territories, which constitutes a
violation of a wide range of civil and political
rights." As part of "Strategies to achieve
full and effective equality, including…mechanisms
in combating racism, racial discrimination,
xenophobia and related intolerance"
Egypt insisted that "…Other issues to be
addressed include…foreign occupation.
**
"The Durban II agenda should ring other
alarm bells for democratic societies, as
the non-paper declares a clear
assault on the freedom of expression
under the guise of combating alleged
Islamophobia. Here are some of
the issues and suggestions now on the table:
**
*"Permissible limitations on the exercise of
the right to freedom of expression
should be codified."
* "The need to draw up a code of conduct"
for journalists
*"Define the threshold for legitimately
restricting freedom of expression in
order to protect the victims."
*"The imbalance between the defence
of secularism and respect for
freedom of religion"
* "The ideological pre-eminence of
freedom of expression."
*****
FN-alliansen av islamister och
kommunister använder sin
vanliga taktik:
Beskylla alla motståndare
för att vara "islamofober"...
Upplagd av hcp kl. 00:30