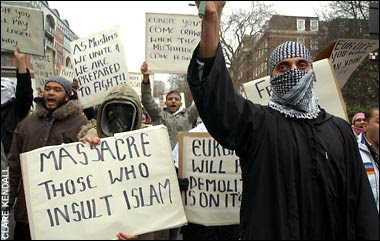 Extremists are winning the battle for
the hearts and minds of Britain's young
Muslims, a disturbing police report warns.
**
Increasing numbers have become so
alienated from mainstream society
that they could even lend their support
to jihadi terrorism, the study claims.
While most reject violence, many distrust
police and are reluctant to inform on extremists.
The report was commissioned by the
Association of Chief Police Officers (Acpo)
after last year's failed bomb attacks in
London's West End and at Glasgow Airport.
It is to be discussed at Acpo's annual
conference this week.
**
The study, entitled Hearts and Minds
and Eyes and Ears: Reducing Radicalisation
Risks Through Reassurance Orientated
Policing, warns that "the threat to the
UK from jihadist terrorism may increase
in the future".
It concludes: "Increasing numbers of
young Muslim people are becoming sufficiently
disaffected with their lives in liberal-democratic
-capitalist societies that they might be willing
to support violent terrorism to articulate their
disillusionment and disengagement."
**
Across Britain, the security services have said
they are tracking 2,000 individuals suspected
of having links to terrorism, investigating 200
networks and monitoring 30 plots.
**
Professor Innes's report warns that Islamist
terror groups are increasingly operating
away from traditional Muslim areas, and
are seeking new ways to radicalise vulnerable
young people. It comes as police investigate
alleged terror plots in Exeter and Bristol.
**
A poll last year by Populus found that
13 per cent of Muslims aged 16 to 24
"admire organisations like al-Qa'eda that
are prepared to fight the West".
**
He told The Telegraph: "Within Muslim
communities there are those people
completely against the means and aims
of terrorism, and there are those in favour.
"Then there is a disturbing proportion
of people in the middle whose ideas,
beliefs and support for extremism will
shift depending on what's happening
around them, what al-Qa'eda and their
like are doing, and what the police are doing."
***
Läs hela artikeln i Daily Telegraph
Upplagd av hcp kl. 13:00