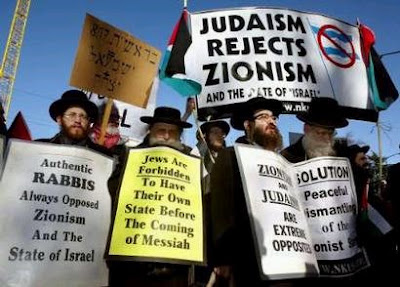 En tänkvärd artikel av Daniel Saunders
på Yisrael: Struggling with God:
***
The Antisemitic Jew
I am the antisemitic Jew. My origins lie lost in history.
Perhaps my first appearance can be found in the book
of Melachim (Kings), where, as Rav-shakeh, I joined
the Assyrian army besieging Yershalayim (Jerusalem)
and attempted to discourage the Israelite defenders of
the city. Centuries later I appeared in the Talmud as Bar
Kamtza, who, angry with the rabbinic leadership,
encouraged the Roman Caesar to wage war against
the Jews, resulting in the destruction of the Temple.
**
As we reach the Middle Ages, my appearances become
more frequent. In 1144, as a baptised Jew, now a monk
called Theobald, I helped to spread one of the earliest
blood libels, the Norwich blood libel, by claiming that
every year the Jews meet and choose which child should
be killed. In 1239, as Nikolas Donin, I was responsible for
the first Talmud burnings, by telling Pope Gregory IX
that the Jews are guided by the evil of the Talmud.
In the age before printing, these burnings left whole
communities without access to this vital text of Jewish
law and lore.
**
Likewise in 1509, as Johannes Pfefferkorn,
I urged the secular and religious authorities to ban the
Talmud, arguing that it causes all Jewish evil.
In 1263, as Pablo Christiani, a baptised Jew, now a friar,
I challenged Rabbi Moshe ben Nachman to debate the
truths of Judaism and Christianity. It was hoped that I
would win, forcing the Jews of Spain to convert to
Christianity. I lost, but Rabbi Moshe was exiled from
Aragon.
**
As we move into the modern era, my actions have
continued to cause havoc and antisemitic persecution.
In the nineteenth century, as Karl Marx, I said that
the secular god of the Jewish people is money,
prompting generations of left-wing antisemitism,
most notably in the Soviet bloc. In the 1860s, as
Iakov Brafman, I claimed that there is a massive
Jewish conspiracy aimed at the enslaving and
exploitation of non-Jews. In 1935, as the Hungarian
Prime Minister Bela Imredi, I passed laws limiting
the presence of Jews in certain professions; I was
forced to resign when it emerged that I too was
Jewish.
**
In the late twentieth century, as Holocaust survivor
Israel Shahak, I tried to convince people that Jews
saw non-Jews as inferiors, to be murdered and
abused and claimed that Orthodox Jews would not
violate Shabbat to save the lives of non-Jews
– I even claimed to have witnessed such an incident,
although I later had to admit that I was lying. I falsely
claimed that Jews murdered heretics. I even
portrayed numerous historical antisemitic massacres
as understandable reactions to Jewish behaviour.
My work was commended by another Jew, Noam
Chomsky, who also wrote the preface to a book
of Holocaust denial.
**
At the moment I am every anti-Zionist Jew,
religious and secular, who embraces those people
who would murder other Jews for being Israeli
or even for being Jewish.
Yes, I have lived a long and busy life.
Some people call me the self-hating Jew, but this
is a misnomer. I am not self-hating, but proud of
my hatred, my ability to cause mischief and
mayhem by spreading my calumnies.
Perhaps as long as there are Jews and antisemites,
there will be antisemitic Jews, an eternal being
not bothered by his paradoxical nature.
Upplagd av hcp kl. 13:00