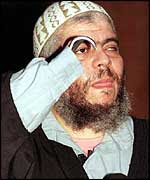 During a question answer session in
East London Mosque, preacher Imam
Abdul Makin was asked by a niqabi
muslima about recent fatwa from a
well known Imam .
Naqabi Woman: “One eyed hooked Imam
Hamza Mesri said muslims can kill British
infidels and have sex with their wives and
daughters, Do you agree with him?”
Imam: “It is not what Imam Hamza said
nor is there a question of my agreeing
with him or not. It is in Quran thus those
are Allah’s orders.”
N.W.: “But why would Allah tell muslims
to kill and rape innocent non muslims?”
Imam: “Because Non-muslims are never
innocent, they are guilty of denying Allah
and his prophet. If you don’t believe me,
here is the legal authority, the top muslim
lawyer of Britain, Anjem Choudary
N.W. “ But our Prophet was sent as a mercy
for all the humanity;
he never hurt anybody in his life”
Imam: “Yes he never hurt a muslim in his life.
But Allah said non-muslim are lowest beasts
and worst creatures in ayas 8.22,8.55,95.5 and
98.6 and muslim are ordered to kill them."
N.W.:” But did prophet approve of killing
them and raping their wives?”
Imam: “Yes he did. He not only approved
of such acts, he and his sahabas practiced
it regularly under Allah’s orders.
He was helpless in it... If you don’t believe me ,
you have to believe sahih hadiths.
I will quote you two hadiths about his typical
day after a raid. These hadiths are about the
raid on jewish village Khaibar whose chief was
Kinana who had gorgeous 17 year old wife Safia.
Prophet tortured and beheaded Kinana in front
of Safia and raped her all night afterwards.
**
Läs resten i Islam Watch
***
Anjem Choudary förklarar i TV
varför det är tillåtet att döda
icke-muslimer.....
Se filmen
Upplagd av hcp kl. 13:30