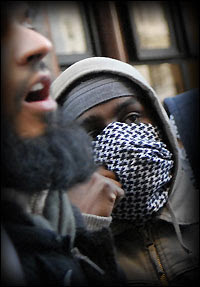 British-born Muslim Hassan Butt
spent 10 years inside radical Islamist
groups, recruiting and training militants,
before renouncing violence and trying to
help others escape radical Islamist networks.
**
"I was involved in the whole world of
radical Islam from the age of 16 onwards.
For 10 years it was my family," Butt told
Reuters in an interview on Wednesday,
seeking to explain how he became
enveloped in a world of "religious hatred".
**
"I financed terrorism, I recruited people
to go to terrorist training camps,
I myself have been to terrorist training
camps," he said, mentioning Afghanistan
and Pakistan, where he spent two years
after the September 11, 2001, attacks on the
United States.
**
But nearly three years ago, Butt began
questioning his beliefs and the direction
he was taking, and after four British Muslims
blew themselves up in London in July 2005,
killing 52 people, he began to turn his back
on militancy.
**
But it has not been a simple transition.
"My life was easier being a terrorist
than it is now that I am no longer a terrorist,"
he said, speaking by phone from his
home in Manchester, northern England.
**
"It's not easy being hunted by
jihadis who want to kill you, moderate
Muslims who think you have betrayed Islam,
and the Manchester police who might want to
prosecute me."
**
Läs Reuters artikel
Upplagd av hcp kl. 07:00