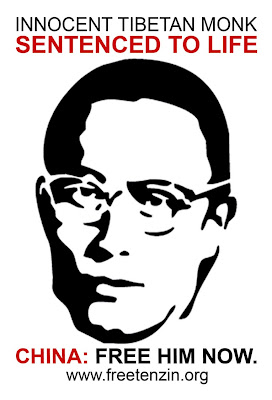 On January 26th, 2003, twenty-eight year
old Tibetan Buddhist monk Lobsang Dhondup
was executed by Chinese authorities in secret
with a bullet to the head.
His teacher, Tenzin Delek Rinpoche, was also
sentenced to death. Both men were wrongly
arrested and convicted for their alleged
involvement in a series of unsolved bombings
in Eastern Tibet. Following an intense
international campaign by Tibetans and
supporters, Tenzin Delek’s sentence was
commuted to life in prison last year.
China wants this innocent monk to disappear,
just like they wish for Tibet as a nation to disappear.
**
Tenzin Delek, like many Tibetans, was a social
activist, and a peaceful Buddhist scholar,
and even hailed by the Dalai Lama as a
“Tulku,” or a reincarnated monk.
China’s reasons for imprisoning him were
for “bombs,” but the only bombs that
Tenzin Delek dropped were knowledge
about the truth: Tibet has been an illegally
occupied and illegally colonized nation by China
since 1949.
**