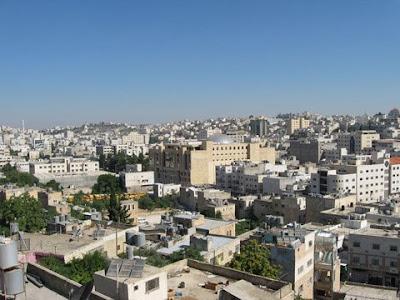 Bloggaren David Wilder, som till skillnad från alla
självutnämnda "experter" bor i den gamla judiska
staden Hebron, har kloka ord att säga om de
senaste dagarnas händelser i staden:
**
Following the expulsion of families from Beit
Hashalom in Hebron, during a radio interview
with the BBC, I was asked about our future
plans. When I responded that the community
would continue to purchase property in
Hebron, the interviewer asked,
"But won't that just cause more violence?"
I answered, "If I bought a home in London
and was told that a Jew purchasing on 'that
side of the city' would cause a violent reaction,
how would that be viewed? Probably as anti-
Semitism and racism. Why then can't a Jew
buy property in Hebron, just as people purchase
homes all over the world?"
**
Another common question I've had to field from
journalists is, "Don't you think this has all gotten
out of control?" My response is quite simple:
"Of course it is totally out of control. That's not
the question. The question is who is out of control?"
Clearly, in my opinion, those who have lost control
are those democratic institutions which are
designed to protect citizens from despotic leadership.
**
Following purchase of Beit Hashalom for close to
$1 million, the Hebron community found itself under
attack from numerous sources. Rapidly the question
of our legitimate presence in the building made its
way to court. The original court decision found
enough evidence supporting our claims to
prevent immediate eviction. However, harsh
restrictions were imposed, including denial to
install windows and to hook up to the Hebron
municipal electric grid. Only in the middle of a
major snowstorm did the defense minister allow
installation of windows in the building last winter.
**
Due to the political sensitivity of the case, we soon
found ourselves opposite a Supreme Court panel
hearing the various issues involved. That panel
was composed of Supreme Court President Dorit
Beinisch and Justices Edmond Levy and Uzi
Fogelman. Levy is religious. Following a break
in the court hearings, Beinisch changed the panel,
removing Levy and Fogelman and replacing them
with Justices Ayala Procaccia, who is known
to be one of the most left-wing justices on the
court, and Salim Joubran, the only Arab on the
court. Beinisch, it must be noted, is not known for
her right-wing ideological opinions.
Two leftist justices and an Arab were left to
decide the fate of the Jews living in Beit Hashalom.
If that's not a stacked deck, nothing is.
So wrote retired District Court judge Uzi Struzman,
calling the court's final decision blatantly political.
***
Läs hela artikeln
**
The Wilder Way
(David Wilders blogg)
****
Min kommentar:
Glöm inte vad som är den egentliga
stridsfrågan: Ska 700 judar få lov att
bo i fred med sina grannar i den
gamla judiska staden Hebron ?
Eller ska 160.000 muslimer få
fördriva judarna (liksom de gjorde
1929) ? Allvärldens antisemiter
stödjer islamisternas kamp för ett
judefritt Hebron. De demokratiska
krafterna borde enas om att stödja
rätten till att bo var man vill inom
det egna landet, oavsett ras
och religion.
Upplagd av hcp kl. 12:45