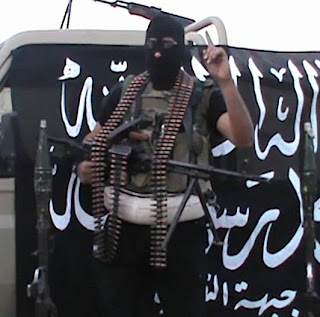 Tyska underrättelsetjänsten BND
via IPT:
Finansieringen av kriget mot Assad-
klanen kommer från salafistiska kretsar
i Saudiarabien, Qatar och de övriga emi-
raten. Ledningen låg till en början i
Muslimska Brödraskapets händer, men
börjar alltmera glida över till lokala Al
Qaedaemirer och syriska jihadister.
Däremot har Al Qaeda stora svårig-
heter att rekrytera utländska jihadister.
**
"Around 90" terror attacks in Syria "can
be attributed to organizations that are
close to [al-Qaida] or jihadist groups,"
German daily Die Frankfurter Allgemeine
Zeitung (FAZ) quoted from German intelli-
gence estimates. The intelligence report
confirms an article in Monday's New York
Times suggesting strong growth of home-
grown and al-Qaida-related groups in
Syria's  ongoing civil war.
**
The Times claims that "homegrown Muslim
jihadists, as well as small groups of fighters
from [al-Qaida], are taking a more prominent
role and demanding a say in running the
resistance."
The trend started with the failure of the largely
secular protest movement in March 2011 which
has devolved into civil war led by more religious
organizations like the Muslim Brotherhood.
As funding pours in from the Arabian Gulf, less
radical organizations have even begun to take
on an extremist veneer.
**
According to the Times, "most of the money
flowing to the Syrian opposition is coming
from religious donors in Saudi Arabia, Qatar
and elsewhere in the Persian Gulf region
whose generosity hinges on Salafi teaching."
This money has colored many rebel groups,
pushing them away from nationalism and
towards pan-Islamist ideology.
**
It also has moved the conflict away from a
broad-based Syrian resistance of al-Assad,
toward a sectarian conflict between the
Sunni majority and the Alawite ruling elite.
But that hasn't yet attracted many foreign
al-Qaida activists. Unlike Iraq's insurgency,
Syrian's rebels are still largely locals.
One insurgency organizer told the Times that
of the approximately 50,000 fighters, less
than 1,000 were foreigners and that they
"had trouble gaining local support."
The claim suggests that although Syria
was the primary gateway for Islamist
insurgents entering Iraq, the trend hasn't
traveled in the opposite direction.
Upplagd av hcp kl. 10:00