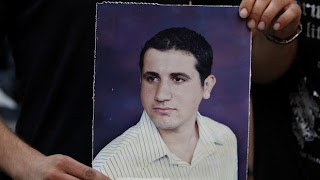 Det finns fortfarande en liten grupp
kristna kvar i Hamas Gaza.
De behandlas självklart som dhimmis.
Den lite ovanliga källan till denna nyhet
är PLO:s "nyhetsbyrå" Ma´an:
GAZA CITY (Ma'an) -- Christians in the
Gaza Strip staged a sit-in protest on
Monday after the family of a young man
said he was being forced to convert to
Islam by an armed group, Ma'an's
correspondent said.
**
Dozens of Christians protested in the
Orthodox church in Gaza City, claiming
that a Christian man and two girls had
been kidnapped. A Muslim association
said they had converted to Islam of
their own free will.
**
Greek Orthodox Archbishop Alexios said
Ramiz al-Amash had been kidnapped by
an Islamist group on Saturday after
attempts to force him to convert from
Christianity to Islam and he was pre-
vented from calling his family.
**
Archbishop Alexios said al-Amash's
parents "went to the police to lodge
a complaint about the kidnapping of
their son, but they did nothing."
**
Al-Amash's mother became sick and
had to be taken to hospital.
The family managed to contact the
kidnappers and they took Ramiz to
see her surrounded by three jeeps
filled with gunmen. They then took
him away again to an unknown
location.
**
"There are some groups trying to
persuade young Christians to convert
to Islam. They abduct them away
from their parents and their families,
they threaten them," he said.
Archbishop Alexios called on officials
to intervene to stop abductions,
stressing that there has been a good
relationship between Muslims and
Christians over the past years.
***
Påståendet om det "goda förhållandet"
mellan muslimer och kristna är minst
sagt nonsens. En dhimmi kan möjligen
tolereras, men aldrig respekteras av
muslimer.
Bat Ye’or beskriver vad dhimmiskapet
innebar:
"Dhimmis were excluded from public office
and armed service, and were forbidden to
bear arms. They were not allowed to ride
horses or camels, to build synagogues or
churches taller than mosques, to construct
houses higher than those of Muslims or to
drink wine in public. They were forced to
wear distinctive clothing and were not
allowed to pray or mourn in loud voices —
as that might offend Muslims.
The dhimmi also had to show public
deference toward Muslims; for example,
always yielding them the center of the road.
The dhimmi was not allowed to give evidence
in court against a Muslim, and his oath was
unacceptable in an Islamic court. To defend
himself, the dhimmi would have to purchase
Muslim witnesses at great expense. This left
the dhimmi with little legal recourse when
harmed by a Muslim"
Upplagd av hcp kl. 10:00