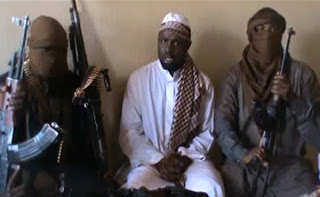 Atlas Shrugs har en nyhet som
gammelpressen kommer att tiga om:
"50 Christians burned to death in
pastor's home"
Nation becoming 'killing fields' as
Islamists declare: 'Convert or die'
Fifty members of a northern Nigerian
church were burned to death in their
pastor’s house.
The attack by armed gunmen was only
the first in a 12-village spree of violence
that left over 100 dead in northern Nigeria’s
Plateau State, a region that had previously
been outside Islamic terrorist group Boko
Haram’s operational area and is the home-
land of the largely Muslim Fulani tribesmen.
Yet Boko Haram claimed responsibility for
the attacks and threatened even more
violence.
Open Doors, USA spokesman Jerry Dykstra
says this most recent wave of attacks is
quickly turning all of Nigeria into deadly
religious battlefield, where Boko Haram
is declaring Christians must covert …
or die.
**
“Nigeria is truly becoming the new killing
field for Christians. Hundreds of Christians
have already been brutally murdered –
including women and children – by the
Boko Haram,” Dykstra said.
“The Boko Haram earlier this week said
that all Christians need to turn to Islam
or ‘they would never know peace again.’
Their goal is make all of Nigeria a country
run and dominated by Shariah law.”
Church of Christ of Nigeria officials report
that all of their denomination’s church
buildings were burned to the ground in
the 12-town rampage.
Plateau State is home to the nomadic and
largely Muslim Fulani tribesmen, the group
that some Nigerian security officials say
was originally blamed for the attack.
Upplagd av hcp kl. 00:15