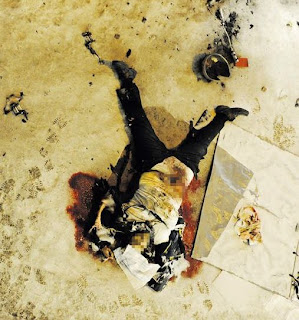 A surprising number of Swedes

have traveled to to partici-

pate in jihad. The most important

of those was Abu Qaswara al-Maghribi

born Swedish citizen that was the ISI's

operational chief in before his

of his control over the primary jihadi

was responsible for the ISI's external

networks, which focused on the

importation of fighters from abroad.

Before joining al-Qaeda's operation in

, Abu Qaswara was a fixture at

articles on for jihadi publi-

cations) and trained at the Khalden

Although the details are unclear, Abu

Qaswara may have been running a

wide-ranging network outside of

during his tenure as Emir in

for leading a network funneling

and was questioned exten-

sively about Abu Qaswara during

his detention. Moreover, during

was linked to attacks in ,

most notably the ill-fated effort

by two men in , including

a British-born Muslim of Iraqi

bombs at a nightclub

and at the airport.

Abu Qaswara was not the only

Swede to make the journey to

a suicide bombing in whose

The men were both described as

as having traveled through

personnel file requests that his

wife not be contacted by ISI

authorities, but she was apparently

called by ISI personnel after his

years in fighting, the duration

raises the question of whether he

traveled in and out of during

that period-a process that would

have been similar to that under-

taken by al-Abdaly if he indeed

traveled to for jihad.