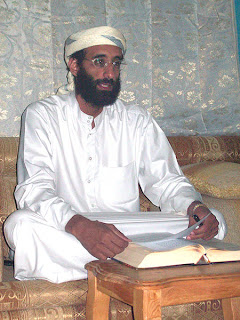 Imamen Anwar Al-Awlaki, ideolog
för Al-Qaeda i Jemen (AQAP) har
utfärdat en ny fatwa.
Den offentliggörs för första gången
i nummer 4 av Al-Qaedas tidning
Inspire.
Ämnet är helt nytt:
Jihad mot Västerlandets plånböcker......
**
Robert Spencer skriver om fatwan
i Jihad Watch:
In an attempt to deal with the cash-shortage
jihadist groups are facing, Al-Awlaki gives
religious justification to any actions used
by jihadists to obtain money.
In the article, titled "The Ruling on Dis-
possessing the Disbelievers' Wealth
in Dar Al-Harb", He deals with the issue
by ruling that Western countries are considered
Dar Al-Harb, i.e. the territory of war, countries
on which the rules of war apply.
Since this is the case, Al-Awlaki says Muslims
living in the West are not bound by any laws
or contracts that prohibit them to harm their
countries of residence.
**

Drawing on jihadist literature that marks a

distinction between dar al-harb (the land of

war, which is not governed by Islamic law and

in which there is no truce between Muslims and

non-Muslims) and dar al-'ahd (the land of

covenant, where Muslims and non-Muslims

have entered into a pact of non-aggression),

Muslims are not bound by the covenants of

citizenship and visa that exist between them

and nations of dar al-harb.

It is the consensus of our scholars that the

property of the disbelievers in dar al-harb is

halal [permissible] for the Muslims and is a

legitimate target for the mujahidin.

citizens of countries where the public opinion

is supportive of some of the Muslim causes."

In such unnamed countries, Awlaki says, it

belonging to disbelievers with known animosity

With respect to , however, Awlaki

has no reservations about stealing from

any parties in his former homeland.

Awlaki writes, "both the government and

private citizens should be targeted."

The American people who vote for war

mongering governments are intent on no

good. Anyone who inflicts harm on them

in any form is doing a favor to the ummah.