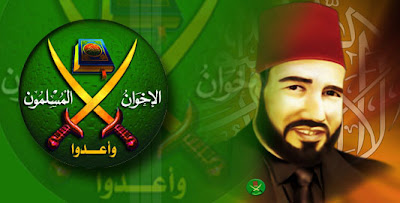 Islamistexperten Douglas Farah har ett varningens
ord kring Muslimska Brödraskapets infiltration av
Obamas administration. Hilary Clinton, en politiker
som borde veta bättre, ställer glatt upp som invignings-
talare på ett MB-arrangemang. MB-aktivister dyker
plötsligt upp som "rådgivare" åt Obama:
The Muslim Brotherhood legacy organizations have
recently made tremendous strides in occupying
positions of influence within the Obama administration,
at the same time the FBI and other law enforcement
officials have move to cut ties to the very same
organization.
**
The MB has only one political agenda-its own.
Its organizations strongly backed George W. Bush
in 2000 and 2004, (remember the famous picture
of Bush hugging the al Arian family?). Hoping for
friendlier pastures, the groups switched their support
to the Dems in ‘08. So far, it appears to be paying of. Big time.
**
The architect is Dr. John Esposito, a long time defender
of the MB and the head of the Saudi-financed George-
town University Prince Alwaleed bin Talal Center
for Muslim-Christian Understanding at the Walsh
School of Foreign Service.
The same Dr. Esposito who maintained prior to 9/11
that radical Islam was essentially a myth and certainly
no danger. It is hard to imagine any academic being
so consistently wrong in their professed field of expertise
maintaining much influence, but there he is, deeply
enmeshed with all the major MB legacy groups in
the country.
(...)
To be clear: these groups have a clearly enunciated
and never renounced policy of toppling the government,
hollowing out the institutional structures, and imposing
the caliphate here, where Sharia law is the law of the
land. As I have often said, if they want to openly join
the political process and espouse this, they are welcome
and they will be marginalized, even within the Muslim
community.
It is the fact that these organizations are front groups
for a foreign movement that wants to end our political
system (while supporting radical Islam) that I object to.
**
First is the announcement by the Center for the Study
of Islam and Democracy (CSID), a sort of umbrella
organization for many of the MB groups in the United
States, that Secretary of State Clinton (along with a
senior MB leader from Britain who has been banned
from the United States previously will be keynote
speakers at their 10th anniversary celebration.
It is hard to imagine the vetting process of the
Secretary letting this one through, and time will tell
if it really on her agenda or an attempt to hype the
event. Here is what GMBDR says on CSID:
**
CSID was founded in 1998 largely by the efforts of
Georgetown University academic Dr. Esposito who,
during the 1990’s, had served in the State Department
as a “foreign affairs analyst.” Many members of the
early CSID board were associated with the International
Institute of Islamic Thought (IIIT), the American Muslim
Council, and the Muslim Public Affairs Council (MPAC).
For example, past CSID board members included Jamal
Barzinji and Taha Al-Alwani, both important Brotherhood
leaders who are closely associated with the now defunct
SAAR Foundation, still under investigation by the U.S.
government. Both Barzinji and Al-Alwani helped to
establish many of the most important U.S. Brotherhood
organizations. The current CSID Vice-Chair, Antony
Sullivan, has many ties to U.S. Brotherhood groups
including the Association of Muslim Social Scientists
(AMSS), the United Association for Studies and
Research (USAR), and the Circle of Tradition and
Progress (COTP), a group whose other founding
members included Youssef Qaradawi, the most
important leader of the global Muslim Brotherhood.
From its inception, CSID has argued that the U.S.
government should support Islamist movements
in foreign countries and has received financial
support from the National Endowment for
Democracy and the United States Institute of Peace.
**
Dr. Esposito, who will also be attending the conference,
has been a long-time supporter of the global Muslim
Brotherhood and has espoused views consistent with
Brotherhood doctrine. During the 1990’s was known
for his claims that Islamic fundamentalism was, in
fact, democratic and posed no threat to the U.S.
Dr. Esposito has at least a dozen past or present
affiliations with global Muslim Brotherhood/Hamas
organizations including having served on the
advisory boards of the Institute of Islamic Political
Thought in the U.K. and the United Association for
Studies and Research in the U.S. and has served with
global Muslim Brotherhood leader Youssef Qaradawi
on the Steering Committee of the Circle of Tradition
and Progress. In 2005, Saudi prince Alaweed bin Talal,
a financial supporter of the global Muslim Brotherhood
donated $20 million to the Center for Muslim Christian
Understanding at Georgetown, headed by Dr. Esposito.
**
The second is the naming Dalia Mogahed as one of the
Muslim members of the President’s Advisory Council
Faith-Based and Neighborhood Partnerships. She is
(surprised gasps all around) an Esposito protege.
Ms. Mogahed, who was born in Egypt and lived in the
U.S. since the age of 5, is the executive director of the
Gallup Center for Muslim Studies and the co-author
of a book with Dr. Esposito suggesting that majority
of the world’s Muslims support some form of democracy.
Dr. Esposito is also a member of the Gallup Center
along with Ahmed Younis, previously a National Director
for the Muslim Public Affairs Council (MPAC), part of
the U.S. Muslim Brotherhood. In 2003, Ms. Mogahed
was identified in 2003 as the Outreach Coordinator
for the Islamic Center of Pittsburgh (ICP) whose co-
founder recently lost a DOE security clearance and
whose Imam will probably be deported on immigration
violations. Ms. Mogahed is the daughter of Elsayed
Mogahed, an Egyptian immigrant who is a former
engineering scientist at the University of Wisconsin
and director of the Islamic Center of Madison (ICM).
The website of the ICM links mainly to U.S. Muslim
Brotherhood organizations and Souheil Ghannouchi,
the President of the Muslim American Society (MAS),
was ICM Imam and President for several years.
The MAS is part of the U.S. Muslim Brotherhood
and closest to the Egyptian Muslim Brotherhood.
So, there we have it.
And it isn’t pretty.
***
Läs hela artikeln
Upplagd av hcp kl. 13:41