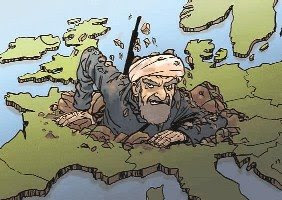 The Terror Finance Blog berättar:
European Union Funding
and the Push to Legitimize Hizballah
By Ilan Weinglass
Recent attempts by Britain to dialogue with Hizballah,
and a planned address by Khaled Mashaal to Britsh MPs,
may well be the result of a lobbying effort funded by the
European Union. Jonathan Spyer, in an article yesterday,
reports that The Conflicts Forum, which openly
acknowledges attempts to legitimize Hamas and Hizballah,
received a 500,000 Euro grant from the European Union
in 2007. In other words, The EU is funding a group trying
to change EU policy.
Some excerpts from the article:
A cursory observation of the backers of Conflicts
Forum, however, reveals a curious paradox.
In January 2007, the group proudly announced that
it had been awarded a grant of €500,000 by the EU,
to develop "more inclusive and legitimate approaches
to transforming the Middle East conflict."
More specifically, the project entails the "engagement"
of "faith-based movements."So the EU, while currently
opposing "engagement" with Hamas, also appears to be
offering financial support to a body engaged in lobbying
for the organization.
***
Läs hela artikeln
Upplagd av hcp kl. 16:15