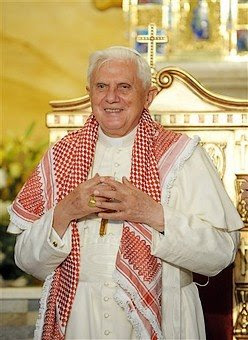 Jerusalem Post rapporterar från Påvens besök i Mellanöstern:
Pope Benedict XVI said Saturday that his visit to the
Middle East was a reminder of the "inseparable bond"
between the Catholic Church and the Jewish people,
a relationship that has been strained at times under
his leadership.

The pope spoke from Mount Nebo, the wind-swept hill over-
looking the Jordan valley from where the Bible says Moses
saw the Promised Land. The sun broke through the morning
mist just before the pope arrived at the site on the second
day of a weeklong visit to the Middle East that will also
take him to Israel and the Palestinian territories.
"May our encounter today inspire in us a renewed love for
the canon of sacred scripture and a desire to overcome all
obstacles to the reconciliation of Christians and Jews in
mutual respect and cooperation in the service of that
peace to which the word of God calls us," said Benedict.
......
The pope's forceful condemnation of anti-Semitism
and acknowledgment of Vatican mistakes have s
oftened Jewish anger over the bishop. But another
sore point has been World War II Pope Pius XII,
whom Benedict has called a "great churchman."
Jews and others say he failed to do all he could
to stop the extermination of European Jews.