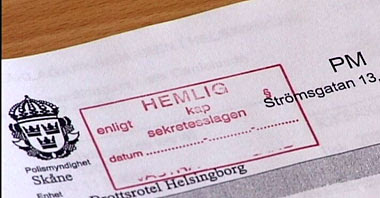 EUROPOL publicerar sin årliga sammanställning
över terrorismen i Europa. Bland nyheterna kan
konstateras att islamismen fått ett eget kapitel.....
**
TE-SAT 2009
EU terrorism situation and trend report
**
En kort sammanfattning:
■ In 2008 one bomb attack with Islamist
terrorist background took place in the UK.
■ Arrests made in Spain, Belgium, France
and other countries were related to attack
planning activities. These plans indicate
that Islamist terrorists aim at causing
indiscriminate mass casualties.
■ A number of member states judge that
they continue to face a high-level threat
from Islamist terrorism for reasons that
include military presence in Iraq or
Afghanistan or accusations of anti-Muslim
attitudes.
■ In 2008, 187 people were arrested on
suspicion of Islamist terrorism. The majority
of arrests took place in France and Spain.
Arrested suspects had a variety of
backgrounds, including North African,
South Asian, Turkish and also European.
■ ‘Home-grown’ terrorism is a cause of
concern. A majority of the arrested
individuals belonged to small autonomous
cells rather than to known terrorist
organisations.
■ Islamist recruitment activities have largely
been driven underground. Radicalisation
activities are noted to have moved from
mosques and other public places into
private spaces. Prisons and the Internet
continue to be locations of concern
regarding this phenomenon.
■ Afghanistan and Pakistan seem to have
replaced Iraq as preferred destinations
for volunteers wishing to engage in armed
conflict.
***
Of the 1009 persons that, according to information
from the member states, were arrested in
the EU in 2008 on suspicion of involvement in
terrorism, 187 were arrested in relation to
Islamist terrorism. This is a decrease of 7 percent
as compared to 2007, following an earlier
decrease of 21 percent from 2006 (257) to 2007
(201).
The majority of the arrests took place
again in France and Spain, with 78 and 61
arrests, respectively.
**
The number of member states which reported
arrests related to Islamist terrorism decreased
from 14 in 2007 to ten in 2008. These were
Belgium, Denmark, France, Germany, the
Republic of Ireland, Italy, the Netherlands,
Slovakia, Spain and Sweden.
**
As in 2006 and 2007, the majority of the arrested
suspects came from North African countries,
most notably Algeria, Morocco and Tunisia,
although the share of Moroccan and Tunisian
citizens in the numbers of arrests halved as
compared to 2007. Like for 2007, France
reported a high number of arrests of French
nationals in 2008. Other suspects apprehended
in France in 2008 originated from various EU
member states (55 percent), including Belgium,
Germany, Spain and the Netherlands, and outside
the EU (37 percent), such as Pakistan, Afghanistan
and Turkey.
****
Terrorism Monitor kommenterar:
The Belgian cell illustrates another major problem,
which is the connection between the Afghanistan-
Pakistan region and the terrorist threat in Europe.
Indeed, as the report states, “Afghanistan and Pakistan
seem to have replaced Iraq as preferred destinations
for volunteers wishing to engage in armed conflicts.”
These recruits pose a threat to European troops
deployed in Afghanistan. Germany, for instance,
is particularly worried about the presence of several
of its citizens (most notably Eric Breininger) in
the region who are allegedly plotting operations
against German troops
(see Terrorism Focus, January 28).
**
When fighters return – such as members of
the Belgian cell, or members of the Sauerland cell
in Germany – they pose a direct threat to European
security. As expressed by U.S. Director of National
Intelligence, Dennis Blair, “the primary threat from
Europe-based extremists stems from al-Qaeda and
Sunni affiliates who return from training in Pakistan
to conduct attacks in Europe or the United States.”
Upplagd av hcp kl. 12:00